CONFIRMED: While Creepy Joe Biden Was VP, His Son Hunter Had ‘Sweetheart’ Job As ‘Board Member’ For Ukranian Oligarch Energy Company Burisma

Hunter Biden’s involvement with the Ukrainian energy firm and his sweetheart deals with China’s communist regime while his father was vice president were exposed in Peter Schweizer’s bestselling book Secret Empires.In an interview last month on SiriusXM’s Breitbart News Tonight, Schweizer explained, “Joe Biden was the Obama administration’s point-person on policy towards Ukraine. He steered $1.8 billion in aid to that government and while he was doing so, his son got a sweetheart deal with this energy company that — we’ve been able to trace over just a 14-month period — paid $3.1 million into an account where Hunter Biden was getting paid.”

Joe Biden’s son, Hunter Biden, was paid for his work as a board member a Ukrainian oligarch-owned energy company while his father was vice president, the New York Times confirms.

Joe Biden is not just a notorious hair sniffer and child rubber, he is also a massively corrupt career politician who used his power and influence as America’s vice president for 8 years to give his son Hunter a sweetheart job as a highly-compensated ‘board member’ of the Ukrainian energy company, Burisma Holdings.

Remember that name and write it down – Burisma Holdings. Their site says ‘Burisma Group is the leading private natural gas producer operating in Ukraine. Offering a wide range of services, we are the first and only fully integrated gas operator in Ukraine engaged in the exploration, production, processing, transportation, and final sale of hydrocarbons’.

So what does Hunter Biden know about ‘the exploration, production, processing, transportation, and final sale of hydrocarbons’? Nothing. Nada. Zip. Zilch. Hunter was just there to get paid, and his dad Creepy Joe used the office of vice president to keep the money rolling in. By any means necessary, as you will see in the article below.

FROM BREITBART: According to the Times, Hunter Biden was paid “as much as $50,000 per month in some months” as a board member of Burisma Holdings, a natural gas firm owned by a member of the Ukrainian oligarchy.

Vice President Joe Biden was heavily involved in mediating U.S. policy towards the Ukraine. When a Ukrainian prosecutor launched a corruption investigation into the energy company Hunter Biden was board member of, Joe Biden threatened to withhold $1 billion in U.S. loan guarantees to the country if the Ukrainian government did not fire the prosecutor. As John Solomon of The Hill reported, Biden’s threat would have thrown the former Soviet republic into insolvency at a time when Ukraine was fending off threats from Vladimir Putin’s Russia.

In a speech last year before the Council on Foreign Relations, the former vice president bragged about his successful use of these strong-arm tactics to get the prosecutor fired, saying that he told the Ukrainians, “If the prosecutor is not fired, you’re not getting the money.” Biden then boasted, “Well, son of a bitch, he got fired.”

Kenneth Vogel and Iuliia Mendel report at the Times:

It was a foreign policy role Joseph R. Biden Jr. enthusiastically embraced during his vice presidency: browbeating Ukraine’s notoriously corrupt government to clean up its act. And one of his most memorable performances came on a trip to Kiev in March 2016, when he threatened to withhold $1 billion in United States loan guarantees if Ukraine’s leaders did not dismiss the country’s top prosecutor, who had been accused of turning a blind eye to corruption in his own office and among the political elite.

The pressure campaign worked. The prosecutor general, long a target of criticism from other Western nations and international lenders, was soon voted out by the Ukrainian Parliament.

Among those who had a stake in the outcome was Hunter Biden, Mr. Biden’s younger son, who at the time was on the board of an energy company owned by a Ukrainian oligarch who had been in the sights of the fired prosecutor general.

Hunter Biden was a Yale-educated lawyer who had served on the boards of Amtrak and a number of nonprofit organizations and think tanks, but lacked any experience in Ukraine and just months earlier had been discharged from the Navy Reserve after testing positive for cocaine. He would be paid as much as $50,000 per month in some months for his work for the company, Burisma Holdings. 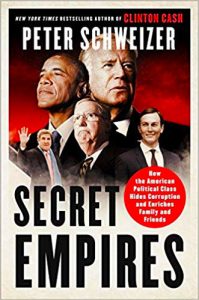 Hunter Biden’s involvement with the Ukrainian energy firm and his sweetheart deals with China’s communist regime while his father was vice president were exposed in Peter Schweizer’s bestselling book Secret Empires.

In an interview last month on SiriusXM’s Breitbart News Tonight, Schweizer explained, “Joe Biden was the Obama administration’s point-person on policy towards Ukraine. He steered $1.8 billion in aid to that government and while he was doing so, his son got a sweetheart deal with this energy company that — we’ve been able to trace over just a 14-month period — paid $3.1 million into an account where Hunter Biden was getting paid.”

“It’s a huge problem,” Schweizer added. “And it goes to this question of corruption and potential payoffs and bribes that these foreign entities were making to the Bidens in exchange for hopefully getting favorable treatment.” READ MORE

2014: Hunter Biden Gets His Do-Nothing, Sweetheart Fake Job Thanks To Father Creepy Joe

A son of the US Vice-President has joined the board of directors of Ukraine’s largest private gas producer. Hunter Biden now leads the company’s legal unit – getting the position a few weeks after his father’s trip to Kiev. And, as Marina Portnaya explains, this could be more than just a coincidence.

2019: Burisma Holdings Is The Scandal That Will End Joe Biden’s Career