Hamas appeared to admit using human shields to fire rockets into Israel for the first time today, but refused to accept responsibility for the slaughter of hundreds of innocent... 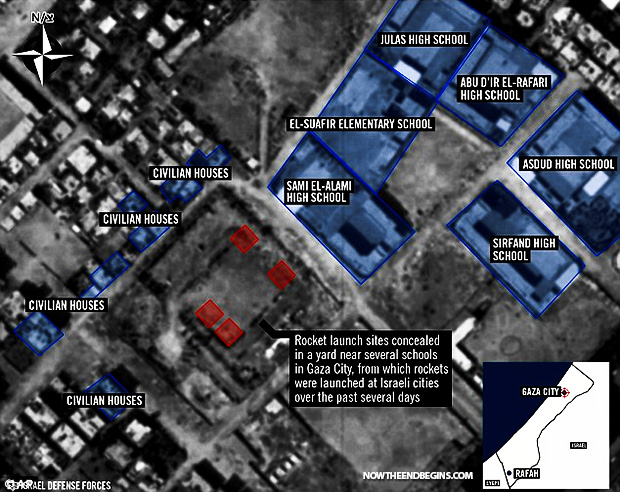 Hamas appeared to admit using human shields to fire rockets into Israel for the first time today, but refused to accept responsibility for the slaughter of hundreds of innocent Palestinians killed in retaliatory airstrikes.

Evidence: This photo, provided by the Israel Defense Forces, shows the Gaza City neighborhood of Sheikh Radwan where it says Hamas used four rocket launch sites sitting next to a cluster of schools and nearby residences

In a veiled confession that comes two weeks after the end of the Gaza war, a senior Hamas official said the group’s fighters had no choice but to use residential areas from which to launch missiles into their neighbour’s territory.

But while Ghazi Hamad claimed they took safeguards to keep people away from the violence, he admitted ‘mistakes were made’, blaming Israel’s heavy-handed response for the deaths of civilians. ‘Gaza, from Beit Hanoun in the north to Rafah in the south, is one uninterrupted urban chain that Israel has turned into a war zone,’ said Mr Hamad, a senior Hamas official in Gaza.

Increasingly, the discussion is not about whether the Hamas rockets were fired from civilian areas, but exactly how close they were to the actual buildings.

‘The Israelis kept saying rockets were fired from schools or hospitals when in fact they were fired 200 or 300 meters (yards) away. Still, there were some mistakes made and they were quickly dealt with,’ Hamad told The Associated Press, offering the first acknowledgment by a Hamas official that, in some cases, militants fired rockets from or near residential areas or civilian facilities.