In England, The United States And Around The World, The COVID-1984 Fear Mongers Are Twisting Statistics To Create A Terrifying But False Narrative

Remember way back when in the start of the plannedemic, how Dr. Birx told us that all people who died of whatever disease but also had COVID-19 would be classified as a COVID-19 death? So someone with COVID-19 who died of cancer or heart disease would be listed as dying of COVID-19? That, my friends, is a total scam, it's the old-fashioned shell game, three-card monte, a Ponzi scheme, take you pick, it's a lie. Yet, somehow, we just meekly accepted it, never pushed back, and allowed ourselves to be enslaved by a lie. Now that lie has grown to be a giant, and has become the greatest weapon that the enemies of freedom have ever had to control us.

Of those who have died from coronavirus, 35,806 people (95.6 per cent of the total) had at least one pre-existing serious medical condition. In fact, there have been just 42 deaths of people aged under 40 without a pre-existing condition.

There are some shocking COVID-19 statistics coming out today from the UK, shocking because they actual numbers paint a scenario that is not just a little different from grim predictions, it is absolutely 180° degrees in the opposite direction. In short, the people of England and the UK are waking up to the fact that their government has been lying to them about COVID-19, using it as a means of controlling the population. The exact same thing has been happening across the pond here in the United States as well.

“This know also, that in the last days perilous times shall come.” 2 Timothy 3:1 (KJB)

I live in Saint Augustine, Florida, in St. Johns County, and as of today we have had a total of 7,881 COVID-19 cases with 90 fatalities, giving you right around a 1% mortality rate. But when you take away pre-existing conditions, that drops to just a handful of people. That is less than the number of people who die from the flu each year. So why are we being forced to wear masks, having lockdowns in states like California and Pennsylvania, and seeing Jews arrested in New York City for gathering to celebrate their religious faith? I think you know the reason.

Remember way back when in the start of the plannedemic, how Dr. Birx told us that all people who died of whatever disease but also had COVID-19 would be classified as a COVID-19 death? So someone with COVID-19 who died of cancer or heart disease would be listed as dying of COVID-19? That, my friends, is a total scam, it’s the old-fashioned shell game, three-card monte, a Ponzi scheme, take you pick, it’s a lie. Yet, somehow, we just meekly accepted it, never pushed back, and allowed ourselves to be enslaved by a lie. Now that lie has grown to be a giant, and has become the greatest weapon that the enemies of freedom have ever had to control us.

And it’s been amazingly successful, so much so that I think even our captors are surprised at how how much thier plan has succeeded. When I walk through our Public supermarket, I see all the workers in mask, I see nearly all the customers in masks, I am not, and when I look in their eyes I see stone, cold fear.

Take a look at how the same thing is happening in the UK.

What they DON’T tell you about Covid: Fewer beds taken up than last year, deaths a fraction of the grim forecasts, 95% of fatalities had underlying causes

FROM THE DAILY MAIL UK: With the nation’s health at stake, it was revealed this week that GCHQ has embedded a team in Downing Street to provide Boris Johnson with real-time updates to combat the ‘emerging and changing threat’ posed by Covid-19. The intelligence analysts will sift through vast amounts of data to ensure the Prime Minister has the most up-to-date information on the spread of the virus.

How accurate were the Government’s grim predictions?

The short answer is: not very. In a July report commissioned by Chief Scientific Adviser Sir Patrick Vallance, scientists estimated that there could be 119,000 deaths if a second spike coincided with a peak of winter flu. Yesterday, that figure stood at 54,286 – less than half that.

In fact, the second peak seems to have passed – over the past week there has been an average of 22,287 new infections a day, down from 24,430 the week before.

In mid-September, Sir Patrick made the terrifying claim that the UK could see 50,000 new coronavirus cases a day by mid-October unless more draconian restrictions were introduced. Yet we have never got near that figure.

What about its prophecies on deaths?

Ditto. Its warnings simply don’t bear any relation to reality.

During the ‘Halloween horror show’ press conference used by Sir Patrick and Chief Medical Officer Professor Chris Whitty to scare the Government into implementing a second lockdown, one of their slides suggested that daily Covid-19 deaths could reach 4,000 a day by December. With ten days to go, we’re still at less than 15 per cent of that figure. In fact, as the graph above shows, the current death rate is significantly below almost every modelled winter scenario. 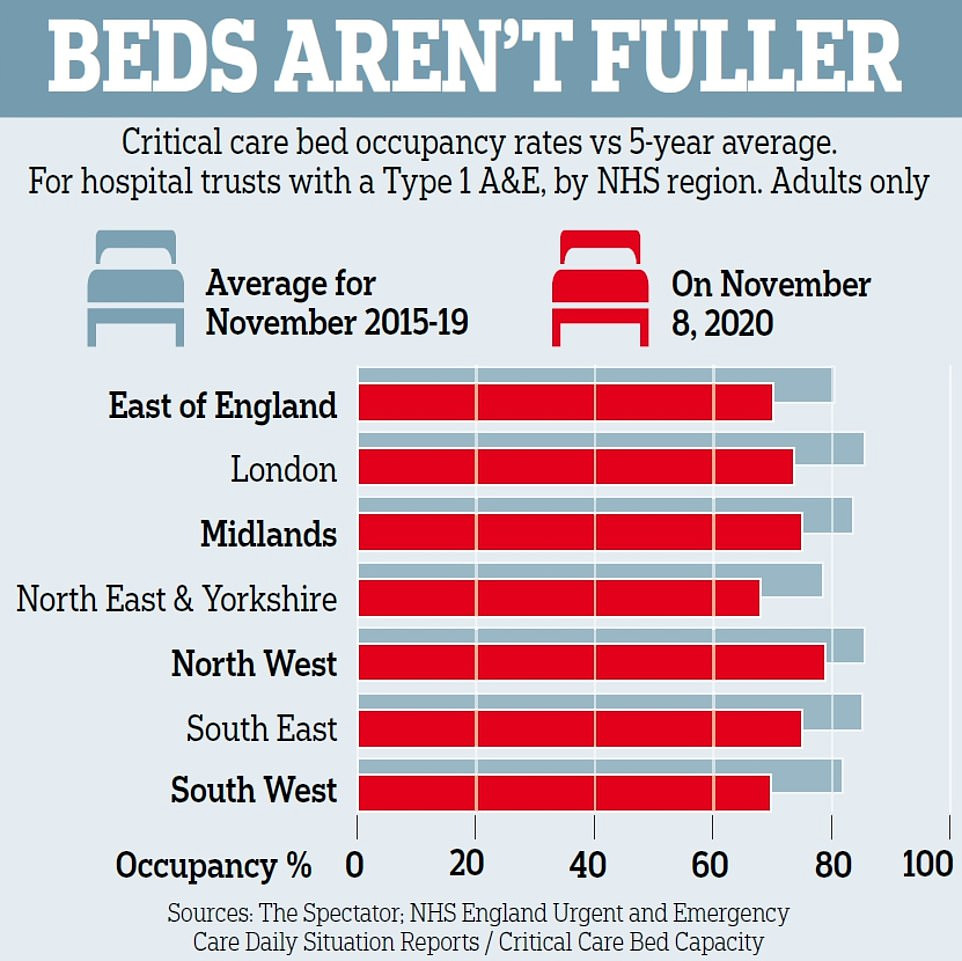 Are hospitals close to full capacity?

The answer is ‘no’ – contrary to what the Government experts would have you think after they last month published a chart that gave the impression that hospitals were close to overflowing, when at least half didn’t have a single Covid-19 patient.

Currently, only 13 per cent of NHS beds are occupied by patients with Covid-19.

On Monday this week, 16,271 hospitals beds across the UK were taken up with patients who had tested positive for Covid-19. This did show a steady rise from the previous Monday, when there were 14,279 patients with Covid. But to put this figure into perspective, the NHS in England had 101,255 general and acute beds available in March of this year plus 15,392 in Scotland and 10,563 in Wales.

How does it compare with last year?

Remarkably, as the graph shows, the number of NHS England beds currently occupied is lower than last year’s average.

On November 5, the most recent date available, there were actually 1,293 fewer patients in hospital beds than last year’s November average.

Surely intensive care beds are full? Some hospitals are under pressure but that is not the picture everywhere as the chart above shows. On Wednesday, 1,430 people with Covid-19 were occupying beds with mechanical ventilation.

So who is COVID-19 killing?

To put it simply, the victims are overwhelmingly the elderly and those with pre-existing conditions.  Of the 37,470 Covid-19 deaths recorded by NHS England up to November 18, 53.7 percent were of people aged over 80.

In comparison, there have been just 275 deaths (only 0.7 per cent of the total) in people under 40. And crucially, those who have died from Covid-19 are overwhelmingly likely to have suffered from a pre-existing condition.

Of those who have died from coronavirus, 35,806 people (95.6 per cent of the total) had at least one pre-existing serious medical condition. In fact, there have been just 42 deaths of people aged under 40 without a pre-existing condition.

Are more dying now than in the first wave?

No. The number of Covid-19 deaths is significantly lower than the peak in April as the graph above shows. On April 21, for example, there were 1,224 Covid-19 deaths, and a daily average for the week of 838. Yesterday, 511 new deaths were reported.

Despite what the fear-mongers would have you think, deaths are not far above average for this time of year. READ MORE

This is the most crucial bit of information that is being omitted, obfuscated or downplayed by government and mainstream media reports about coronavirus deaths: Dr. Birx admits that some countries count deaths from hearts attacks etc., while the U.S. counts those same deaths as coronavirus. This “liberal” method, as she describes it, could perhaps be called “misleading.” The death records say “coronavirus” but most of these deaths are linked to pre-existing ailments, other diseases.