The Obama administration is purging!. The two figures most linked to the disaster in Benghazi, Secretary of State Hillary Clinton and Petraeus, are gone. The figure most linked with... 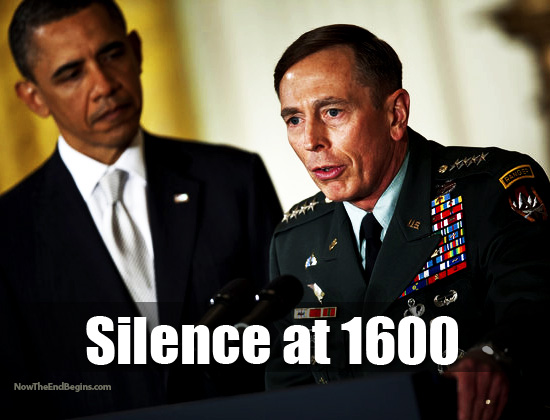 Now that the Obama administration has succeeded in winning a second term, they are cleaning house. The two figures most linked to the disaster in Benghazi, Secretary of State Hillary Clinton and Petraeus, are gone. The figure most linked with Fast and Furious, Eric Holder, will be gone. The figure most linked to the administration’s economic failures, Secretary of the Treasury Tim Geithner, will be gone.
by Geoffrey Grider November 10, 2012
NOW THE END BEGINS SHARE:

Just two days after President Obama’s re-election, General David Petraeus, the CIA Director, has resigned from the administration over an extramarital affair. Petraeus was slated to testify before Congress next week on the murder of four Americans, including Ambassador Chris Stevens, in Benghazi.

Bret Baier of Fox News just tweeted, “With Petraeus’ resignation effective immediately, he will not testify next week & lawmakers are said to be ‘stunned’ by the announcement.”

He sent a letter to his colleagues stating:

Yesterday afternoon, I went to the White House and asked the President to be allowed, for personal reasons, to resign from my position. After being married for over 37 years, I showed extremely poor judgment by engaging in an extramarital affair. Such behavior is unacceptable, both as a husband and as the leader of an organization such as ours …

This afternoon, the President graciously accepted my resignation.

David Petraeus has provided extraordinary service to the United States for decades. By any measure, he was one of the outstanding General officers of his generation, helping our military adapt to new challenges, and leading our men and women in uniform through a remarkable period of service in Iraq and Afghanistan, where he helped our nation put those wars on a path to a responsible end. As Director of the Central Intelligence Agency, he has continued to serve with characteristic intellectual rigor, dedication, and patriotism. By any measure, through his lifetime of service David Petraeus has made our country safer and stronger.

Today, I accepted his resignation as Director of the Central Intelligence Agency. I am completely confident that the CIA will continue to thrive and carry out its essential mission, and I have the utmost confidence in Acting Director Michael Morell and the men and women of the CIA who work every day to keep our nation safe. Going forward, my thoughts and prayers are with Dave and Holly Petraeus, who has done so much to help military families through her own work. I wish them the very best at this difficult time.

This is only the latest in a string of groundshaking events demonstrating that the Obama administration hid information vital to the American people during the last days of the 2012 election cycle. The fact that the most respected soldier of his generation, Petraeus, would be leaving the administration during an Obama second term, had to be known by the White House prior to the election. And they said nothing in order to run out the clock.

The fact that Attorney General Eric Holder was considering stepping down from the administration had to be known by the White House prior to the election. Meanwhile, during the election cycle, the Obama administration claimed executive privilege in order to shield Holder from questions about Fast and Furious.

The facts in Benghazi were lied about by virtually every member of the Obama administration for weeks upon weeks.

The fact that the administration had been slow-walking reams of vital regulation to beyond the election in order to avoid scaring off voters was hidden from the public.

Only Obama remains. He ran out the clock on his scandals, and now throws anyone associated with them overboard.

The Petraeus resignation is only the most recent evidence that the Obama administration will lie to the American people to achieve its ends. But with all of his experts gone, Obama’s cabinet will now be staffed by the political C team in a time of crisis, both domestically and internationally. source – Brietbart