Last year, Proposition 8 was put before the people of California and they were asked to vote on it. The people overwhelmingly voted AGAINST the Pro-Gay Marriage bill, and... 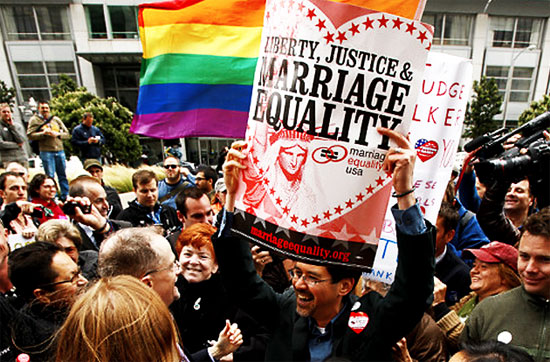 The message sent by the courts today, loud and clear, was that it makes no difference if you vote or not. The courts can just overturn it. So don't vote.
by Geoffrey Grider February 7, 2012
SHARE THIS IMPORTANT NTEB ARTICLE:

This is why people don’t vote

Two years ago, Proposition 8 was put before the people of California and they were asked to vote on it. The people overwhelmingly voted AGAINST the Pro-Gay Marriage bill, and it was resoundingly defeated. But why let a little thing like the ‘will of the people’ stand in the way of the radical, Far-Left Gay Agenda? Today, Prop 8 was overturned in defiance of the clearly expressed and duly voted upon will of the people.

The message sent by the courts today, loud and clear, was that it makes no difference if you vote or not. The courts can just overturn it. So don't vote.

From Yahoo News: The 9th Circuit Court in California struck down the state’s voter-passed ban on gay marriage, ruling 2-1 that it violates the rights of gay Californians.

“Proposition 8 serves no purpose, and has no effect, other than to lessen the status and human dignity of gays and lesbians in California, and to officially reclassify their relationships and families as inferior to those of opposite-sex couples,” Judge Reinhardt wrote in the decision. The Court concludes that the law violates the 14th Amendment rights of gay couples to equal protection under the law. Gay marriage will still not be allowed in the state, leaving time for Prop 8 defenders to challenge the decision.

The Circuit Court backed up District Judge Judge Vaughn Walker, who ruled in August of 2010 that the state of California has no “rational basis” to single out gay men and women as ineligible for marriage. The group fighting for Proposition 8, which passed in 2008 after thousands of gay couples had already married, appealed Walker’s decision arguing that it should be vacated because Walker is gay and has a long-time same-sex partner. The 9th Circuit Court judges denied this motion.

Walker’s sweeping 2010 decision was called a “grand slam” by gay rights advocates, who hoped it would convince the Supreme Court to decide that states cannot outlaw gay marriage. But Reinhardt was explicit in his decision that his court’s decision is “narrow” and only relates to California, not to the entire nation. In California, gay people had the right to marry for several months before it was taken away from them by a majority of voters. This amounts to a violation of equal protection because a right was specifically taken away from a minority group, Reinhardt writes. But this argument would not apply to gay people in other states. “It’s a strong decision but it is not the ringing endorsement of broader marriage equality that some might have hoped for,” Hunter College professor and gay rights advocate Kenneth Sherrill said.

Ted Olson, the former U.S. Solicitor General under George W. Bush who represents the plaintiffs, said at a press conference that the decision is the first step to ending discrimination. “Today we are more American because of this decision,” he said.

The pro-Prop. 8 camp has said it will appeal the decision. The group can now ask that all 11 members of the 9th Circuit hear their case, instead of just the panel of three who decided against them on Tuesday. “Today’s ruling finally clears the field for an appeal to the United States Supreme Court, where we are confident we will be victorious,” the Save Prop 8 campaign said in a statement. source – Yahoo News