The new Yelp 'Business Accused of Racist Behavior Alert' is an extension of our Public Attention Alert that we introduced in response to a rise in social activism surrounding the Black Lives Matter movement. If someone associated with a business is accused of, or the target of, racist behavior, we will place a Public Attention Alert on the business page to warn consumers that the business may be receiving an influx of reviews as a result of increased attention. For businesses accused of overtly racist actions, where we can link to a news article, we will escalate our warning with the Business Accused of Racist Behavior Alert.

The new Yelp Business Accused of Racist Behavior Alert is an extension of our Public Attention Alert that we introduced in response to a rise in social activism surrounding the Black Lives Matter movement.

Kamala Harris was 100% right when she said that the “riots are not going away”, even after the election. What the Left is creating is a permanent mob rule based system of anarchy that will soon vie with the police for control of the streets. The Black Lives Matter Movement, having now received nearly a billion dollars in funding since the riots began, is positioning themselves to be the 21st century version of Adolf Hitler’s Brown Shirts. Think I exaggerate?

There are few social media sites with more impact and influence than consumer review site, Yelp. A good review on Yelp can increase your business by 200%, and a bad review can drive business away in droves. But what if Yelp were to partner with, say, Black Lives Matter, and begin to label businesses that the mob has deemed to be ‘racist’, and then what if they were to publicly label that business, your business, with a Business Accused of Racist Behavior Alert? This is exactly the new business model for Yelp.

How long would it be until the ANTIFA and BLM mobs showed up to your place, bricks flying through your windows, fires set in your showroom, and whatever valuables you have being looted by militia members? Not very long at all, social media is crazy fast and powerful. Are you ready for the mobs to come to your business demanding reparations, their term indicating they are robbing you and telling you that you deserve it? Remember, you don’t actually have to be racist, or do anything racist, or say anything racist, you just have to be accused of it. Fascists love to operate like that.

Somewhere, the charred soul of Hitler is looking up and laughing, wearing a t-shirt that says “Welcome To 1933”, and pointing at you. We call for an immediate boycott of all Yelp properties, this is war, step up or be taken over. 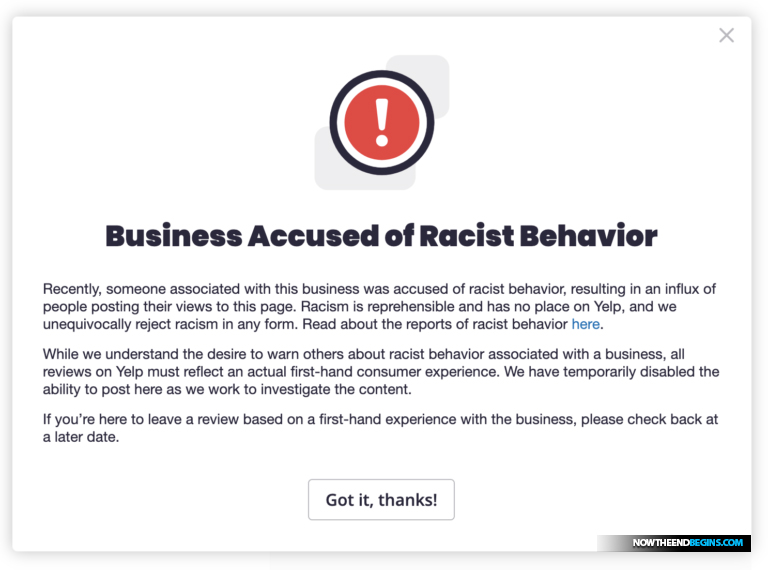 DON’T TAKE OUR WORD FOR IT, CLICK TO READ ALL ABOUT IT ON THE OFFICIAL YELP BLOG SITE

FROM THE OFFICAL YELP BLOG: At Yelp, we value diversity, inclusion and belonging, both internally and on our platform, which means we have a zero tolerance policy to racism. We know these values are important to our users and now more than ever, consumers are increasingly conscious of the types of businesses they patronize and support. In fact, we’ve seen that reviews mentioning Black-owned businesses were up more than 617% this summer compared to last summer. Support for women-owned businesses has also increased, with review mentions up 114% for the same time period.

A New Consumer Alert to Stand Against Racism

Communities have always turned to Yelp in reaction to current events at the local level. As the nation reckons with issues of systemic racism, we’ve seen in the last few months that there is a clear need to warn consumers about businesses associated with egregious, racially-charged actions to help people make more informed spending decisions. Yelp’s User Operations team already places alerts on business pages when we notice an unusual uptick in reviews that are based on what someone may have seen in the news or on social media, rather than on a first-hand experience with the business. Now, when a business gains public attention for reports of racist conduct, such as using racist language or symbols, Yelp will place a new Business Accused of Racist Behavior Alert on their Yelp page to inform users, along with a link to a news article where they can learn more about the incident.

Yelp’s top priority is to ensure the trust and safety of our users and provide them with reliable content to inform their spending decisions, including decisions about whether they’ll be welcome and safe at a particular business. We advocate for personal expression and provide a platform that encourages people to share their experience online, but at the same time it’s always been Yelp’s policy that all reviews must be based on actual first-hand consumer experiences with the business. This policy is critical to mitigating fake reviews and maintaining the integrity of content on our platform. We don’t allow people to leave reviews based on media reports because it can artificially inflate or deflate a business’s star rating.

The new Business Accused of Racist Behavior Alert is an extension of our Public Attention Alert that we introduced in response to a rise in social activism surrounding the Black Lives Matter movement. If someone associated with a business is accused of, or the target of, racist behavior, we will place a Public Attention Alert on the business page to warn consumers that the business may be receiving an influx of reviews as a result of increased attention. For businesses accused of overtly racist actions, where we can link to a news article, we will escalate our warning with the Business Accused of Racist Behavior Alert.  READ MORE

Sen. Kamala Harris: The Nationwide Protests Are A Movement. They’re Not Going To Stop. You Need To Believe Her.

Senator Kamala Harris joined protesters in Washington, D.C. recently and she is following the movement closely enough to understand that this push for equal justice is not going to stop, even after Election Day.