Congress has partially wriggled free from the "Obamacare" health reforms that it passed and subjected itself to three years ago.... 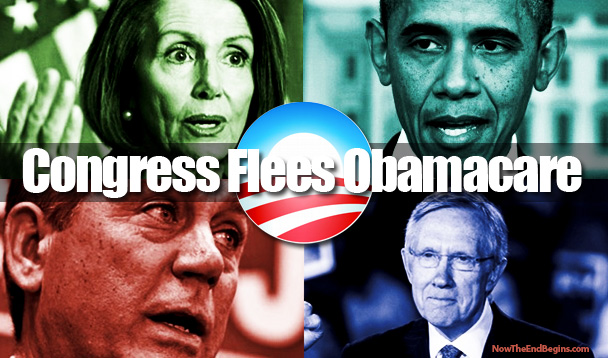 Congress leaves Obamacare to the suckers

The travesty of Obamacare, this illegal tax foisted upon the American people, is such a nightmare that even Congress, who passed it, doesn’t want to live with it or have to pay the costs associated with it. So if millionaire Congressmen can’t afford it, what do you think will happen to YOU?

REUTERS: Congress has partially wriggled free from the “Obamacare” health reforms that it passed and subjected itself to three years ago.

In a ruling issued on Wednesday, U.S. lawmakers and their staffs will continue to receive a federal contribution toward the health insurance that they must purchased through soon-to-open exchanges created by President Barack Obama’s signature healthcare law.

The decision by the Office of Personnel Management, with Obama’s blessing, will prevent the largely unintended loss of healthcare benefits for 535 members of the Senate and House of Representatives and thousands of Capitol Hill staff.

When Congress passed the health reform law known as “Obamacare” in 2010, an amendment required that lawmakers and their staff members purchase health insurance through the online exchanges that the law created. They would lose generous coverage under the Federal Employees Health Benefits Program.

But it soon became apparent the provision contained no language that allowed federal contributions toward their health plans that cover about 75 percent of the premium costs.

But Wednesday’s ruling from the OPM, the federal government’s human resources agency, means that Congress will not have to fully live with the reform language that it created – just as Republicans are trying frantically to delay or defund the program.

The OPM said the federal contributions will be allowed to continue for plans purchased on the new online health insurance exchanges, ensuring that Capitol Hill employees will effectively get the same health contributions as millions of other federal employees who are not being thrown onto the exchanges. source – Reuters