After Meeting With Mitt Romney, End Times Compromiser Billy Graham Says That Mormonism Is Not A Cult, Takes It Off List

“Our primary focus at the Billy Graham Evangelistic Association has always been promoting the Gospel of Jesus Christ,” Ken Barun, the association’s chief of staff, told The Observer in a statement. “We removed the information from the website because we do not wish to participate in a theological debate about something that has become politicized during this campaign.”

“We removed the information from the website because we do not wish to participate in a theological debate about something that has become politicized during this campaign.”

From CBS Local: CHARLOTTE (CBS Charlotte/AP) — The evangelical group run by Rev. Billy Graham does not believe Mormonism is a religious cult anymore. According to The Charlotte Observer, the Billy Graham Evangelistic Association removed Mormonism from its list of religious cults this past week.

“Let no man deceive you by any means: for that day shall not come, except there come a falling away first…” 2 Thessalonians 2:3 (KJB)

“Our primary focus at the Billy Graham Evangelistic Association has always been promoting the Gospel of Jesus Christ,” Ken Barun, the association’s chief of staff, told The Observer in a statement. “We removed the information from the website because we do not wish to participate in a theological debate about something that has become politicized during this campaign.”

Scientologists, Unitarians, and Jehovah’s Witnesses, among others, were listed as religious cults according to Graham’s association. 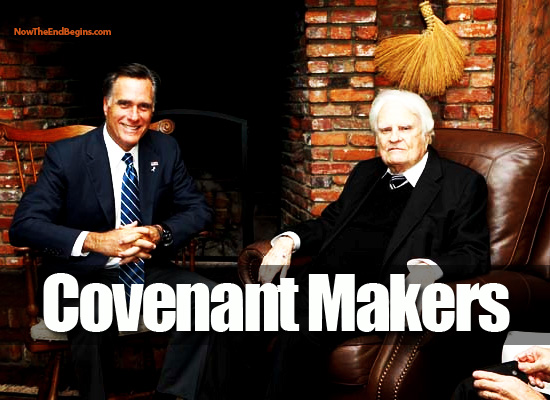 Mormonism teaches that Jesus and Lucifer are BROTHERS. Billy Graham says that’s just fine with him as he declares Mormonism is not a cult.

The move comes after Republican presidential candidate Mitt Romney met with Graham last week, with the aging evangelist pledging to do “all I can” to help the GOP nominee win the presidency.

Romney went to see Graham and his son, the Rev. Franklin Graham, at the elderly evangelist’s mountaintop home in the mountains of western North Carolina.

“Prayer is the most helpful thing you can do for me,” Romney told the 93-year-old Graham.

The Republican candidate said that Franklin Graham, also an evangelical leader, had been helping his presidential bid.

“What you’re planning, what your son has shown me, is going to be very, very helpful. And I appreciate that. It’s going to be terrific,” Romney said near the end of their 30-minute meeting.

Romney adviser Mark De Moss later said Romney and Franklin Graham had been discussing how the younger Graham is doing everything he can “to encourage churches to encourage their people to get out and vote.”

Romney’s embrace of Franklin Graham draws in an evangelical leader who has been criticized for his harsh views of Islam. The younger Graham has described Islam as evil and offensive and has said Muslims should know that Christ died for their sins.

In 2010, the Army withdrew an invitation for Franklin Graham to speak at a Pentagon prayer service because of what officials called inappropriate comments about Islam. At the time of the Pentagon flap, Graham said of Muslims: “I find what they teach and what they preach and what’s on the Internet — I find that to be offensive, too.”

Mitt Romney has faced some difficulty making inroads with evangelical voters, in part because some believe his Mormon faith means he is not a Christian. Earlier this year, the younger Graham expressed support for primary rival Rick Santorum, a Catholic. Pressed during an interview on MSNBC, Graham would not say that Romney was a Christian.

“He is a Mormon,” Franklin Graham said in February. “Most Christians would not recognize Mormonism … but he would be a good president if he won the nomination.”

RELATED ARTICLE: Now Is A Good Time To Learn About Mitt Romney’s Religion Of Mormonism

Franklin Graham also apologized for refusing, in the same interview, to say whether he believed President Barack Obama is a Christian. The trek to see Graham — up a mountain on a narrow road marked by one hairpin turn after another — is a political ritual. John McCain visited in 2008 when he was the Republican nominee. Obama also tried to see him in 2008, when he was in Asheville preparing for the presidential debates, but Graham’s poor health prevented the meeting.

The president visited Graham at his home in 2010, when the Obamas went on vacation to Asheville. Obama and Graham have also spoken on the phone.

At the meeting, Romney and Graham discussed religious freedom and religious persecution, Romney adviser Mark DeMoss said. DeMoss, who sat in on the meeting, said they also discussed the growth of Graham’s ministry in China, Sudan and North Korea. Graham also mentioned Romney’s father, George, whom the elder Graham considered a friend.

Romney told Graham the story of how his father died. “He was on the treadmill one morning at age 88 and he’s jogging on the treadmill and his irregular heartbeat caused him to faint and there was no one there to revive him and so he passed away,” Romney said. North Carolina voted narrowly for Obama in 2008. source – CBS Charlotte