Liberals hate these words: A well regulated Militia, being necessary to the security of a free State, the right of the people to keep and bear Arms, shall not... 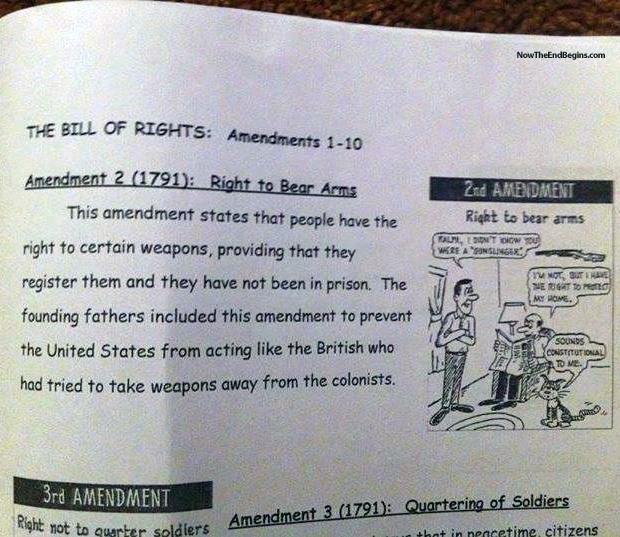 The Second Amendment to the United States Constitution, ratified in December of 1791, reads as follows:

“A well regulated Militia, being necessary to the security of a free State, the right of the people to keep and bear Arms, shall not be infringed.”

The approved Common Core teaching materials on the Second Amendment defines it like this:

“This amendment states that people have the right to certain weapons, providing that they register them and they have not been in prison.” (see textbook illustration above)

No where in any documents in our founding does it mandate that people must “register their guns”, and neither does it say that they are only allowed “certain types of weapons”. These liberal lies are being taught as fact in the Public School system that is now infected with the Common Core virus. We are going to have an entire generation of children who will be raised on the half-truths and outright fabrications.

In the case of District of Columbia v. Heller (07-290). The plaintiff in Heller challenged the constitutionality of the Washington D.C. handgun ban, a statute that had stood for 32 years. Many considered the statute the most stringent in the nation. In a 5-4 decision, the Court, meticulously detailing the history and tradition of the Second Amendment at the time of the Constitutional Convention, proclaimed that the Second Amendment established an individual right for U.S. citizens to possess firearms and struck down the D.C. handgun ban as violative of that right. Cornell Law

Since 1797, liberals in Washington have sought to have the Second Amendment overturned, either through an outright removal of the amendment or by devouring it in bites until it was gone. Common Core teaching materials are the latest weapon in the liberal arsenal that seeks to take us off of the Constitution and place us under Marxist rule. The small cadre of billionaires at the top – Bill Gates, George Soros, et al – are using their mega-wealth to accomplish this goal. Barack Obama is their puppet, and they are pulling the strings.

Do you know why you never see any Muslim demonstrations or protests in any of the southern states? Because they know that people in the south carry guns, lots of guns. Do you know where you see Muslims engaging in street protests and violence? In all the states and cities run by liberals like Chicago, Detroit and California. Do you know that Chicago has more of the strongest guns laws prohibiting gun ownership than anywhere else in the country – yet – they have the highest number of shooting deaths? Gun laws never do anything but disarm the people, criminals will always have guns and never follow any law. 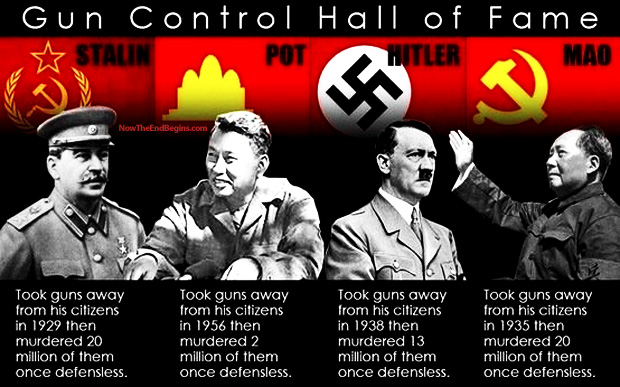 Jews in Nazi Germany were first forbidden to own firearms, then they were placed in ghettos on their way to Concentration Camps. Watch those old newsreels of 6 SS guards with a few German shepherds and a couple of machine guns rounding up thousands of defenseless Jews. Then ask yourself why they are trying to take away our guns in 2014.

I think you know the answer.