To date, citizens of 18 states have petitioned the White House for consideration of a peaceful withdrawal from the United States. That's right, thousands of Americans have already signed... 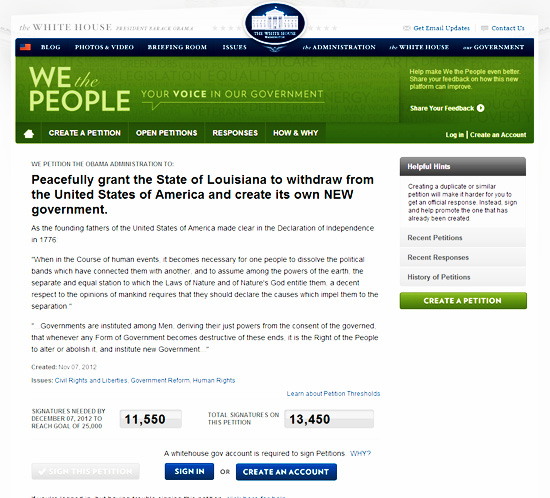 This is no joke, the "people" have had enough.
by Geoffrey Grider November 12, 2012
NOW THE END BEGINS SHARE:

The king’s subjects are not happy

RELATED STORY: Obama Is The King God Has Given To Reign Over America In The Last Days

To date, citizens of 18 states have petitioned the White House for consideration of a peaceful withdrawal from the United States. That’s right, thousands of Americans have already signed petitions at whitehouse.gov asking President Obama to allow them to peacefully secede from the union.

This is no joke, the “people” have had enough.

The ability to create the petitions is something that the Obama administration promised and delivered on because:

“We want to hear from you. If a petition gets enough support, White House staff will review it, ensure it’s sent to the appropriate policy experts, and issue an official response.”

Any petition requires 25,000 signatures for consideration. As you can see, in just a few days, Louisiana is halfway to the necessary total. In order to sign the petition, users simply need to create a whitehouse.gov account and click “sign the petition.”

Before anyone begins to cry treason or some other fear tactic, this is nothing more than an activist tactic (albeit a very dramatic one) attempting to garner government attention for the state of the electorate and our nation.

As whitehouse.gov clearly reminds us:

“The right to petition your government is guaranteed by the First Amendment of the United States Constitution. We the People provides a new way to petition the Obama Administration to take action on a range of important issues facing our country.”

No one is threatening to secede or to wage war against the United States of America. It is a petition, plain and simple. But as they say, desperate times call for desperate measures, and clearly some Americans are feeling the need to make a dramatic noise.

“The US continues to suffer economic difficulties stemming from the federal government’s neglect to reform domestic and foreign spending. The citizens of the US suffer from blatant abuses of their rights such as the NDAA, the TSA, etc. Given that the state of Texas maintains a balanced budget and is the 15th largest economy in the world, it is practically feasible for Texas to withdraw from the union, and to do so would protect it’s citizens’ standard of living and re-secure their rights and liberties in accordance with the original ideas and beliefs of our founding fathers which are no longer being reflected by the federal government.”

I have to admit that this move fascinates me, and leaves me wondering what may be next. Certainly there have been whispers and open talk among political pundits via the news media that a civil war is imminent. Retired Army Reserve Colonel Lawrence Sellin writes, “America is on the verge of fragmentation and civil conflict because its citizens have lost control of their government and lost faith in its political institutions.”

There is no doubt that America is at a crossroads. Just how we navigate this intersection could well define the path of the world forever. source – PolicyMic