Pastor Umar Mulinde urged America to 'stand up before it’s late against the invasion of the Islamization that is going on in your country.'... 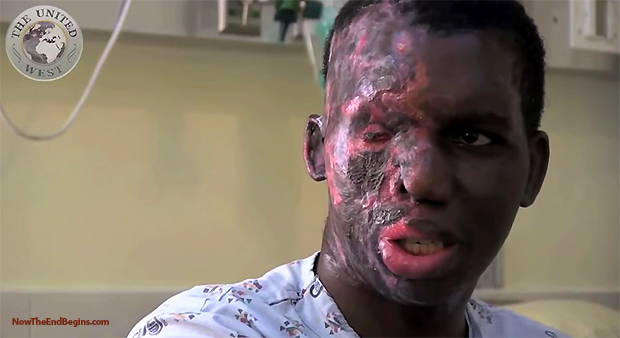 America is playing a deadly game by embracing Islam

Pastor Umar Mulinde was born in Uganda to a Muslim family with his father being an area-Muslim leader. But after Mulinde converted to Christianity he was attacked for his new faith. Mulinde went on record to tell his story and issue a warning to America.

Because he was raised as a Muslim Mulinde says, “I know whatever a good Muslim and a true Muslim… and a leader in Islam must know.” But once he converted to Christianity, he was hated by the Muslims in his community.

Mulinde was called out one night by a voice in the darkness. “Pastor,” the man called. As Mulinde turned to respond to the voice, half of his face was covered in acid by the man in the dark. In an effort to escape, Mulinde turned and ran for help. Half of his face and part of the back of his head was badly burned by the acid. But despite this, Mulinde still has hope.

A tearful moment happens at 4 minutes when he says, “I realized, I had fallen in the hands of my enemies… It’s not because of this [pointing to his scarred face] that I am crying. It’s because of doing something right and then you’re paid something wrong.”

When asked why he wasn’t dead when he should be, Mulinde responds, “God is mighty.” He then turned to deliver a powerful word to America.

“God Almighty has given you the grace. Whatever you do in America influences everyone in the world. You have that grace. One thing that Islam is doing to defeat you is causing you to be coward and fearful to stand up and speak against the invasion of the Islamization that is going on in your country. Stand up before it’s late. …If you get [sic] afraid today, within time, you will find your children and your grandchildren being Muslims and torturing other people. Stand up now and defeat the challenge of the global Islamization agenda.”

He ended by saying, “If it is truth, then let’s stand for it and the God of the Bible will defend your land.” source – Freedom Press