An Oregon judge has awarded Lesbian couple Rachel and Laurel Bowman-Cryer $135,000 for “emotional damages” in a lawsuit against Aaron and Melissa Klein of Sweet Cakes Bakery. They are... 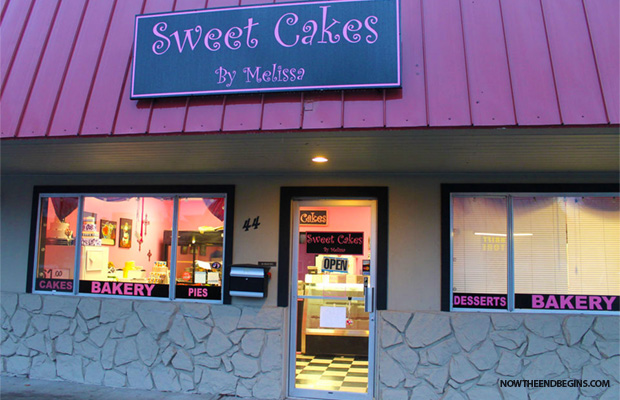 An Oregon judge has awarded Lesbian couple Rachel and Laurel Bowman-Cryer $135,000 for “emotional damages” in a lawsuit against Aaron and Melissa Klein of Sweet Cakes Bakery. They are a Christian couple who declined to provide a wedding cake to the same-sex couple in 2013.

EDITOR’S NOTE: Under the administration of Barack Obama, the persecution of Christians in America who stand for Biblical truths is rapidly spiraling out of control. This latest case is so egregious that it is startling to me that tens of thousands of patriots are not marching on Washington in protest. And because they are not, Christian persecution will only get worse as the darkness spreads. in 2015, if you are not a supporter of the LGBT, you will pay the price.

In their lawsuit, the two women claimed they felt “mentally raped,” as part of a list of 88 symptoms of emotional distress they experienced at being refused a cake.

The Sweet Cakes bakery cannot pay the fine, and will be forced out of business due to the vicious lesbian attack against it.

“The forum concludes that $75,000 and $60,000, are appropriate awards to compensate for the emotional suffering they experienced,” wrote Alan McCullough, administrative law judge for Oregon’s Bureau of Labor and Industries, in his proposed order.

The award will reportedly bankrupt the seven-member Klein family and force Sweet Cakes by Melissa Bakery to shut down. The Kleins’ lawyer, Anna Harmon, said that the damages awarded were not limited to the sale of business assets, but would be taken out of theirpersonal funds.

“The important thing to realize is this,” Harmon said, “This is real money that Aaron and Melissa are going to have to pay that otherwise would be used to pay their mortgage and feed their kids.”

In January of 2013, Laurel Bowman said the bakery would not sell her and her fiancée, Rachel Cryer, a wedding cake. She added that Aaron Klein, co-owner of Sweet Cakes by Melissa, told her that providing them with a wedding cake would be against their religious principles.

This past February, the Oregon Bureau of Labor and Industries (BOLI) announced that the owners of Sweet Cakes by Melissa bakery must pay the lesbian couple damages for refusing to sell them a wedding cake. BOLI spokesman Charlie Burr said there was sufficient evidence that the bakers discriminated against the same-sex couple. source