The Chicago police department operates an off-the-books detention and interrogation center which lawyers say is the equivalent of a CIA black site.... 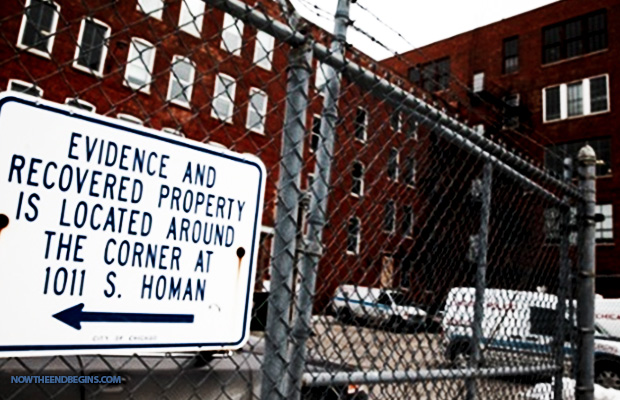 The Chicago police department operates an off-the-books detention and interrogation center which lawyers say is the equivalent of a CIA black site.

The facility, Homan Square, is a warehouse on Chicago’s west side and is where some arrested suspects are literally ‘disappeared,’ without anyone on the outside knowing where they are.

When The Guardian.com conducted an investigation into police abuse in Chicago, those who are familiar with the facility stated that the alleged law enforcement practices at Homan Square have included:

Several special units are housed in the facility including the anti-gang and anti-drug forces as well as other undercover units. Criminal defense attorney, Anthony Hill, says if police “want money, guns, drugs” or information on the flow of any of them in Chicago, “they bring them there and use it as a place of interrogation off the books.”

In 2012, Brian Church was arrested and held for protesting the NATO summit held in Chicago. He was handcuffed to a bench with his feet shackled together, for 17 long hours. His Miranda rights were not read to him, he was denied phone calls and the police also refused him access to an attorney. He was interrogated intermittently and told “Tell us what we want to know and you can go.”

Before the protest, he wrote the phone number for the National Lawyers Guild on his forearm in case he was arrested. However, once he was taken to Homan Square, his request to call a lawyer was denied several times. The Guardian reports that a team of attorneys could not find Church despite 12 hours of active searching.

Sarah Gelsomino, Church’s lawyer, remembers that no booking record existed. Only after she and others made a “major stink” with contacts in the office of Mayor Rahm Emanuel, did they even learn about Homan Square.

The group sent an attorney to the facility where he was eventually allowed to enter, and he spoke to Church through a chain-link metal cage. Hours later, Church was finally transferred to another police station for booking.

Church states “Essentially, I wasn’t allowed to make any contact with anybody.” Speaking of his fellow arrested protestors, he figured “All right, well, they disappeared us and so we’re probably never going to see the light of day again.”

He continues “Homan Square is definitely an unusual place. It brings to mind the interrogation facilities they use in the Middle East. The CIA calls them black sites. It’s a domestic black site. When you go in, no one knows what’s happened to you.”

Chicago lawyer, Julia Bartmes, says “It’s sort of an open secret among attorneys that regularly make police station visits, this place—if you can’t find a client in the system, odds are they’re there.”

Another arrested NATO protester, Vic Suter, was told by an officer as she was being transported to the facility that, “You’re going to get a tour of hell inside Homan.” Once she arrived, she too was handcuffed to a bench with her ankles shackled together for 18 hours, and given with only two bathroom breaks during that time.

When she asked for a phone call, she was told “You’re not getting any phone calls.” She describes being interrogated on and off via the ‘good cop/bad cop’ method without first being informed of her Miranda rights, and access to an attorney was also withheld.

Because of The Guardian’s story, the Chicago police department issued a statement denying any Constitutional abuses, insisting that the “CPD abides by all laws, rules and guidelines pertaining to interviews of suspects or witnesses.” They asserted “There are always records of anyone who is arrested by CPD, and this is not any different at Homan Square.” However, they refused to clarify how long into an arrest or detention it took for those records to be generated.

James Trainum, a retired Washington D.C. homicide detective who is involved with the Innocence Project, has never heard of another circumstance in the nation where police held people incommunicado for extended periods. “I’ve never known any kind of organized, secret place where they go and just hold somebody before booking for hours and hours and hours. That scares the hell out of me that that even exists or might exist.” Well, Mr. Trainum, it most certainly does exist, and in the Occupant’s hometown no less.

With an administration bent on militarizing the police force, an Attorney General who doesn’t know the meaning of justice, and an Occupant who is completely lawless, who disregards our Constitutional liberties and the safety of the American people at every turn, we can expect more of these ‘black sites’ to pop up all over the country. Beware!

“The wicked plotteth against the just, and gnasheth upon him with his teeth. The Lord shall laugh at him: for he seeth that his day is coming. The wicked have drawn out the sword, and have bent their bow, to cast down the poor and needy, and to slay such as be of upright conversation. Their sword shall enter into their own heart, and their bows shall be broken.” Psalm 37:12-15 (KJV) WhooHoo! Amen!