As ridiculous as this story is today, it is also true. There is currently no known bottom at which this nonsense will end. But there is something that this article did not touch upon, and that's this. If 'all love is love', as the LGBTQPwhatever likes to say, then sex between a human and an animal must be protected. The same goes for the North American Man Boy Love Association, they absolutely deserve protection according to the doctrines currently being put forth by the movement.

Gather ’round children! The Canadian Elementary Teachers Federation of Ontario has some super interesting new information for you! First, we’re going to learn a new acronym.

“Wherefore God also gave them up to uncleanness through the lusts of their own hearts, to dishonour their own bodies between themselves: Who changed the truth of God into a lie, and worshipped and served the creature more than the Creator, who is blessed for ever. Amen. For this cause God gave them up unto vile affections: for even their women did change the natural use into that which is against nature: And likewise also the men, leaving the natural use of the woman, burned in their lust one toward another; men with men working that which is unseemly, and receiving in themselves that recompence of their error which was meet.” Romans 1:24-27 (KJV)

EDITOR’S NOTE: As ridiculous as this story is today, it is also true. There is currently no known bottom at which this nonsense will end. But there is something that this article did not touch upon, and that’s this. If ‘all love is love‘, as the LGBTQPwhatever likes to say, then sex between a human and an animal must be protected. The same goes for the North American Man Boy Love Association, they absolutely deserve protection according to the doctrines currently being put forth by the movement. Didn’t think you’d ever live to see the day that this would happen? It is happening right now. Could you have imagined just ten years ago that transexuals and transvestites would get Supreme Court protection not for rights as American citizens but for rights related to their sexual preferences? Protected pedophilia is absolutely on the docket, and when they get enough power it will be their next protected group. Watch it happen. Want to call the Canadian Elementary Teachers Federation and ask about it? The number is (905) 666-1122.

Can you say, “LGGBDTTTIQQAAPP?” Probably not. But that was the subject for the Canadian Teachers Federation ‘inclusiveness training’ seminar. Next, we’ll learn what these letters mean. Are you ready?

L — Lesbian (everyone knows what this is, right?)

G — Gay (and I’m sure I don’t need to explain this to you smarties!)

G — Genderqueer Now this one is new. So let’s make sure we all understand what this means. “Genderqueer; denoting or relating to a person who does not subscribe to conventional gender distinctions but identifies with neither, both, or a combination of male and female genders.” That’s easy, isn’t it, kids? Basically, this is a person who has no idea who or what xey are, okay?

B — Bisexual (That’s self-explanatory, isn’t it?)

D — Demisexual Oh boy! Another new one! Let’s get out the ever-expanding queer dictionary to figure it out! “A demisexual is a person who does not experience sexual attraction unless they form a strong emotional connection with someone.” This used to be known as monogamous love. But now we throw the word “sexual” on it to make it attractive to the kids. Got it?

T — Transgender (You all know all about this one! These are boys or girls who dress up like the opposite sex and want everyone to pretend not to notice!)

T — Transexual (You are familiar with these people too! Same as above, only they’ve gone through irreversible surgery to remove healthy body parts because feelings. Let them in your bathroom. Everything is fine.)

T — Two-Spirit Oh my goodness! How exciting! It’s another category no one on earth has ever heard of! This one is complicated, dear ones. For sure you have to be a Native American. And smoking a lot of peyote could only help to understand what the heck a two-spirit is. It appears to be a third gender not yet discovered by science and only found in the Native American community by gender studies majors who take adventure vacations and hang out in sweat lodges. 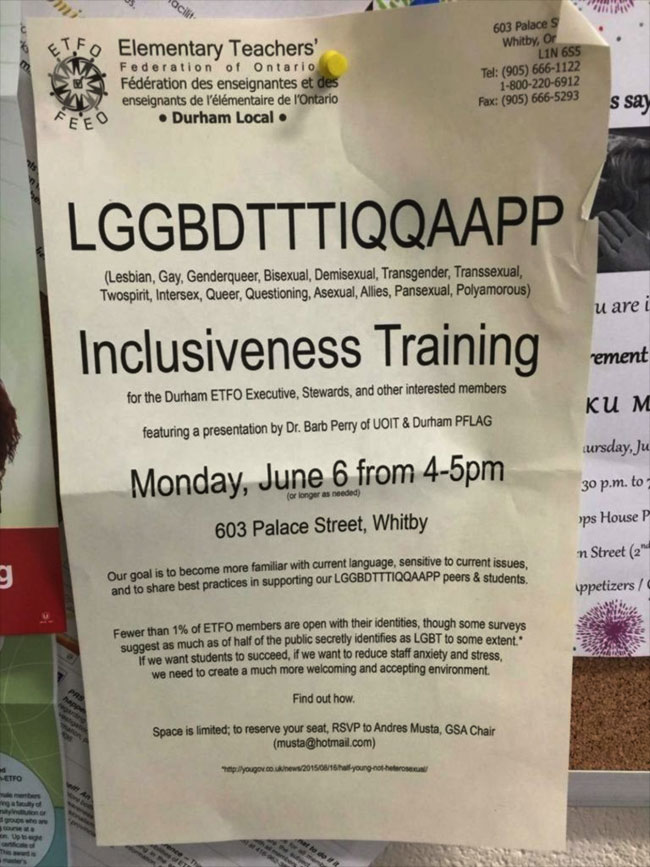 I — Intersex (This is that very rare condition that we used to call hermaphrodite, where a child is born with both sex organs of male and female. It is very rare, as in, hardly ever happens. It is a birth defect.)

We are just motoring through all these new terms and if you need a snack to recharge, choose something high protein! We are going to need those brains functioning at peak capacity for this one!

Q — Queer Just when you thought you couldn’t use the word “queer” because it’s an insult, think again! It’s back! Queer is an umbrella term designed to describe all people who aren’t normies. I think. It’s hard to tell. These things do change on an almost daily basis.

Q — Questioning is a term used for people who are still deciding where they are going to fall on this list. It seems contradictory to the “born that way” theory—to have a bunch of people still questioning their sexuality—but the LGBTQWhatever brigade says it’s fine, so rest assured, there’s nothing to question about questioning.

A — Asexual people have no interest in sex. This also used to be known as people who are married with kids. See the classic TV show “Married with Children” for an example.

A — Allies are people who virtue signal constantly on Twitter about supporting their LGBTQWhatever friends and family. These people aren’t gay, queer, or even questioning! They’re simply shielding themselves from the gaystappo squads who come around looking for people who aren’t properly broadcasting their approval of the queer agenda. Be an ally, children… if you know what’s good for you!

P — Pansexual is just a more confusing way to say bisexual. There really is no difference, only we pretend there is so we can use a word that reminds us of Greek mythology and it sounds more interesting than bisexual, which is so last decade.

P — Polyamorous people are basically leftover hippies who miss communes. Or hardcore Mormons. Either way, they are people who like to have more than one partner, sometimes at the same time. source