Morsi has been endorsed as a key regional player by President Barack Obama and Secretary of State Hillary Clinton.... 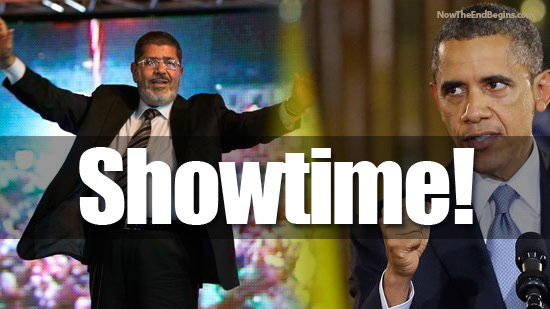 From the start, this was the true goal of Obama’s support of the Arab Spring last year. To seize control of the Middle East’s largest Muslim nation by proxy. Obama has given 1,000% support every step of the way in the Islamic overthrow of Egypt…and now it’s pay day. American money and influence paved the way for Morsi and the Muslim Brotherhood to gain power, with the ultimate goal the destruction of Israel.

From NBC: Although facing widespread criticism at home, where he is accused of a constitutional power grab, Morsi is a formidable mediator having been endorsed as a key regional player by President Barack Obama and Secretary of State Hillary Clinton.

Obama’s Frankenstein monster has come alive, and Morsi has taken full dictatorial control of Egypt  right according to the plan.

He’s the leader of an Arab state with influence over radical Palestinian groups like Hamas, seems determined to be a U.S. ally and seeks a civil, if more formal, relationship with Israel. So, rather than locking horns, separating, and reloading to fight another day, Israel and Hamas will at least have someone they respect to complain to.

The hope is that, over time, negotiations and not rocket fire or airstrikes will become the new habit of “discourse” between enemies. That could be a pipe dream unless Morsi, the Mediator, becomes Morsi, the Enforcer, as well. Will he crack down on the smuggling? Destroy the tunnels? Or will he side with his “ideological cousins” inside Hamas?

It’s too soon to say. For now, few on either side of the Gaza border doubt that this truce will be short lived. As Gazans celebrated the end of their immediate suffering, a poll showed that 70 percent of Israelis disagree with the truce. After generations of bloodshed and crisis, mistrust is deeply entrenched.

It is significant that Obama seems to believe that Morsi can be the “missing link” that moves that moribund peace process forward. On Wednesday, when he thanked the Egyptian president for his “commitment to regional security” following the announcement of the cease-fire, Obama added that he and Morsi agreed to work towards a “more durable solution” to the situation in Gaza.

Morsi may be just the partner with leverage over the Palestinians that Obama needs to try his hand at Middle East peace-making himself. source – NBC WorldNews