Breitbart Obama Tapes To Be Released TONIGHT On Hannity

The full tape will be released tonight on Fox News' Hannity. The tapes show a young Barack Obama leading a protest at Harvard Law School on behalf of Prof.... 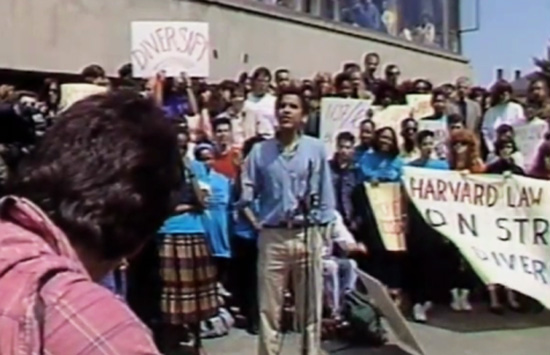 If you've everr wondered where Obama leaned his distaste for America, look no further. He led anti-American protests in college, imagine that.
by Geoffrey Grider March 7, 2012
NOW THE END BEGINS SHARE:

Earlier today, Buzzfeed’s Ben Smith announced on Twitter that video researcher Andrew Kaczynski had released “the mysterious Harvard/Obama/race video that the Breitbart folks have been talking about.”

If you've everr wondered where Obama leaned his distaste for America, look no further. He led anti-American protests in college, imagine that.

The video, which Kaczynski says was “licensed from a Boston television station,” shows a young Barack Obama leading a protest at Harvard Law School on behalf of Prof. Derrick Bell, a radical academic tied to Jeremiah Wright–about whom we will be releasing significant information in the coming hours.

However, the video has been selectively edited–either by the Boston television station or by Buzzfeed itself. Over the course of the day, Breitbart.com will be releasing additional footage that has been hidden by Obama’s allies in the mainstream media and academia.

Breitbart.com Editor-in-Chief Joel Pollak and Editor-at-Large Ben Shapiro will appear on The Sean Hannity Show to discuss the tape. The full tape will be released tonight on Fox News’ Hannity. source – Breitbart