Syria has moved 20 trucks worth of equipment and material used for the manufacturing of chemical weapons into neighboring Iraq, the Lebanese daily Al-Mustaqbal reported on Sunday. ... 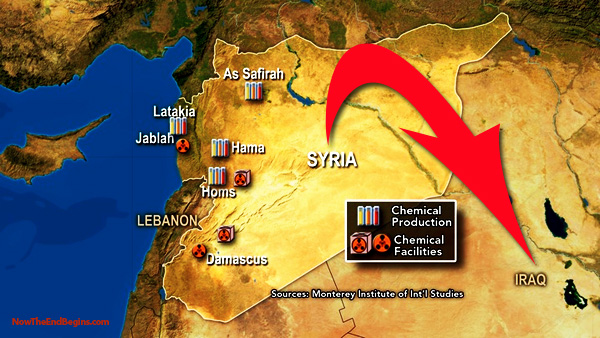 Syria has moved 20 trucks worth of equipment and material used for the manufacturing of chemical weapons into neighboring Iraq, the Lebanese daily Al-Mustaqbal reported on Sunday. The government in Baghdad has denied allegations that it is helping the Syrian government conceal chemical stockpiles.

The report came just a day after the United States and Russia struck a deal stipulating that Syrian President Bashar Assad’s regime would destroy its chemical arsenal to avert an American military assault.

The newspaper reported that the trucks crossed the boundary separating Syria with Iraq over the course of Thursday and Friday. Border guards did not inspect the contents of the trucks, which raises suspicions that they contained illicit cargo, according to Al-Mustaqbal.

Al-Mustaqbal, a publication that has long been affiliated with anti-Syrian political elements in Lebanon, quoted a spokesperson for Iraq’s interior ministry, Saad Maan, as saying that security forces were deployed along the border and were checking all vehicles coming into the country.

“Iraq today is not Saddam Hussein’s Iraq,” he said. “It is not an Iraq which resorts to the use of chemical weapons against its own people or against its neighbors.”

“These accusations are all rumors and are useless and no one believes them,” he said. Last week, the head of the Free Syrian Army told CNN that opposition intelligence indicated Assad was moving chemical arms out of the country.

“Today, we have information that the regime began to move chemical materials and chemical weapons to Lebanon and to Iraq,” General Salim Idriss told CNN.

“We have told our friends that the regime has begun moving a part of its chemical weapons arsenal to Lebanon and Iraq. We told them do not be fooled,” Idris told reporters in Istanbul.

“All of this initiative does not interest us. Russia is a partner with the regime in killing the Syrian people. A crime against humanity has been committed and there is not any mention of accountability.” source – JPost