In the city of Rio de Janeiro, decrees published last week establish mandatory vaccination against Covid-19 for access to various establishments and services. As of September 1st, proof will be required for places of collective use, including gyms, stadiums and sports halls, cinemas , theaters, museums, galleries and art exhibitions, in addition to conventions and conferences. According to the city hall, vaccination will also be mandatory for elective surgeries in public and private networks, inclusion and maintenance in the Carioca Family Card Program.

Brazilian cities have established criteria to minimize the impacts of Covid-19 by making activities more flexible, such as holding concerts, fairs and congresses. The vaccine passport aims to encourage the immunization of part of the population that has not yet sought out vaccination posts.

NTEB’ers in Brazil have been blowing up my email today with reports that the whole country is now demanding that its citizens sign up for mandatory vaccines and the COVID passport, and if they don’t, they will be locked out of public places like gyms, grocery stores, concert venues, you know the deal. Every nation in the world is going to have some version of the COVID Passport before 2021 comes to a close, and 2022? It’s gonna be lights out.

“And Jacob called unto his sons, and said, Gather yourselves together, that I may tell you that which shall befall you in the last days.” Genesis 49:1 (KJB)

In Nazi Germany, one of the things that allowed Hitler to seize power was that as restrictions grew stronger and stronger, the citizens of Germany adjusted to the ‘new normal’ so that over time, the perverse seemed like ‘par for the course’. That’s what the citizens of the world are doing with the COVID Passport and mandatory vaccinations, they are adjusting. And the ones that don’t ‘adjust’ will must needs be dealt with for their non-compliance. Remember reading about Hitler’s Germany in school, and wondering if you would have stood up against Nazi tyranny, and how brave you might have been? Good news, you’re going to get your chance.

CLICK TO SEE HOW HISTORY IS REPEATING ITSELF RIGHT NOW

FROM CNN BRAZIL: (translated by Google Translate from its original Portuguese). A survey by the National Confederation of Municipalities (CNM) shows that four out of ten Brazilian cities have difficulties in completing the population’s vaccination schedule due to the non-attendance on the date set at the health centers for the application of the 2nd dose. The survey heard 1,700 mayors and was published on Friday (27). According to estimates by the Ministry of Health , more than 8.5 million Brazilians stopped taking the second dose against Covid-19. Among the states with the highest number of absentees are São Paulo, with 1.69 million; Rio de Janeiro, with 1.06 million; and Minas Gerais, with 1.02 million.

How the vaccine passport works

The vaccine passport has rules that vary from place to place. The measure takes effect from September 1st, in cities like São Paulo and Rio de Janeiro. According to the CNN survey , states such as Espírito Santo, Amazonas and Ceará have already adopted similar rules.

Find out how the vaccine passport works in different parts of the country:

The vaccine passport adopted by the Municipal Health Department of São Paulo works through the e-saúdeSP application. The digital resource can be used as proof of vaccination for presentation at events in the city with an audience of more than 500 people. The city recommends that access to the event venue is only allowed upon presentation of proof, which will be digitally authenticated by the vaccine passport.

The app can be downloaded for free on mobile shopping devices. The registration includes data such as CPF, date of birth, full name, email and telephone number. The “Vaccine Passport” icon will provide access to proof of vaccination via a QR Code.

It is from this code that event venues will have access to the vaccination record. Registration can also be done through the following addresses: esaúdesp or e-SaúdeSP Paulistana Health Platform . In addition, the physical receipt for access to the events may also be presented.

The city recommends that all events request proof for public access. Disrespect for the rules is subject to penalties, such as interdiction of spaces and fine. 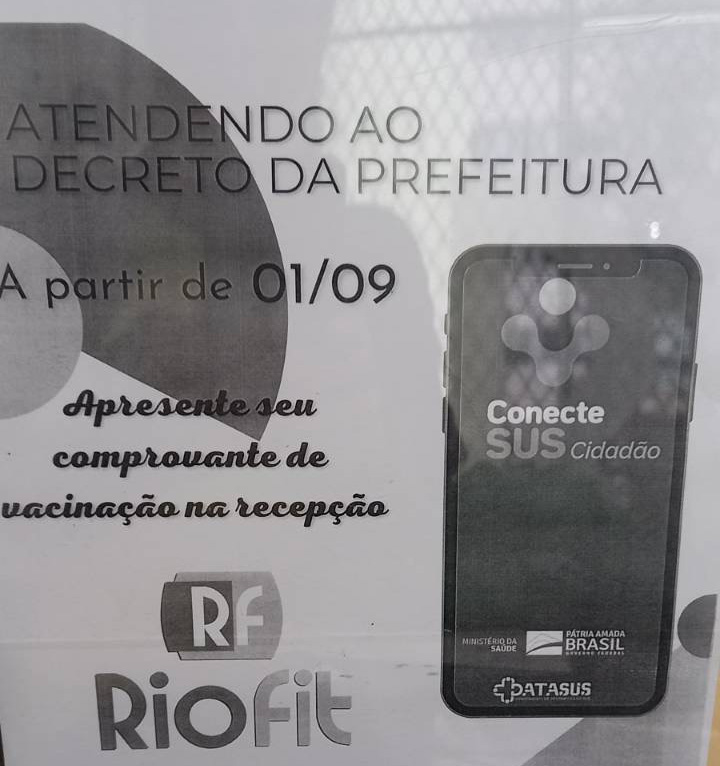 NTEB’ER MARIA IN BRAZIL SENT ME THIS PICTURE OF A SIGN NOW APPEARING IN HER GYM, TELLING HER SHE NEEDS THE VACCINE PASSPORT IF SHE WANTS TO KEEP COMING.

In the city of Rio de Janeiro, decrees published last week establish mandatory vaccination against Covid-19 for access to various establishments and services. As of September 1st, proof will be required for places of collective use, including gyms, stadiums and sports halls, cinemas , theaters, museums, galleries and art exhibitions, in addition to conventions and conferences.

According to the city hall, vaccination will also be mandatory for elective surgeries in public and private networks, inclusion and maintenance in the Carioca Family Card Program.

Proof can be done through the digital certification of the ConnectSUS platform, or with the presentation of proof or physical vaccination booklet. According to the city, the amount of registered doses required must be in accordance with the vaccination schedule of the capital city.

Other locations in Brazil

In Amazonas , a decree that came into effect on August 23 made it mandatory to present proof of vaccination in municipalities in the state for access to floating boats, bars and restaurants, fairs and markets, hotels and inns, as well as social events. The determination of the Intersectorial Committee to Combat Covid-19 considers at least the first dose of immunizing agents.

In Espírito Santo , the current measure allows for events with a maximum audience of 600 people. In addition, the venues must work with 50% of the capacity, with proof of vaccination (with a single dose or first dose) or negative Covid-19 test performed up to 48 hours before the event for audiences of 300 to 600 people being required .

The Ceará created protocols for conducting test events and buffets that include, among other issues, the need for confirmation of complete vaccination carried out at least 15 days in advance. The government of Pernambuco, on the other hand, is working on the development of the “Passe Seguro PE” initiative, a seal that will certify the applications that will guarantee access to shows and large-scale events, which are still restricted. The public will have to prove vaccination with two doses or a negative test for the disease.