Both Parties Playing Politics with the Debt Ceiling Debate.

President Obama must be grinning from ear to ear. not only has the news reported yesterday that Senate Majority Leader Mitch McConnell is scheming to raise the debt ceiling... 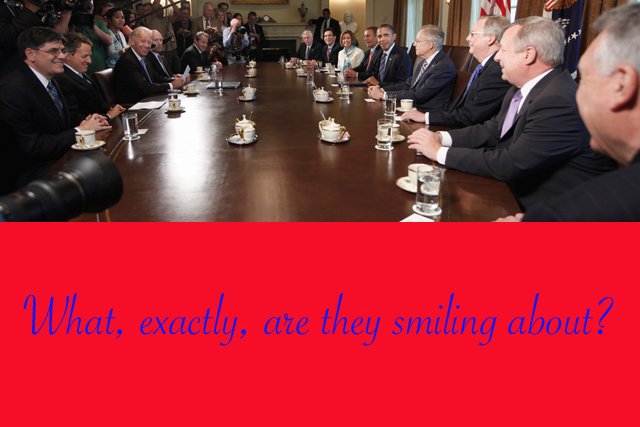 President Obama must be grinning from ear to ear. not only has the news reported yesterday that Senate Majority Leader Mitch McConnell is scheming to raise the debt ceiling with no real spending cuts, but if this plan goes through, Senator McConnell will have handed yet more power over to the Executive Branch. It seems the Senate GOP Leadership doesn’t want to have to “deal with it” again!  In addition to surrendering more of Congress’ power to President Obama, there is no timetable for the cuts in the bill – so they’re rendered effectively meaningless, and the ceiling will be raised “automatically” THREE TIMES during this Congress alone!

If this plan goes through, Senator McConnell will have betrayed you, me, and every other freedom loving patriot in America. The truth is, when I first read the news, I could hardly believe it. Instead of even bothering to try to cut spending, Mitch McConnell just wants to give President Obama a free pass to keep our deficit skyrocketing. Maybe he is playing politics as usual? Perhaps he believes when the whole thing comes crashing down on Obama’s head the Republican’s in office can say “He did it” I am here to tell you IF President Obama has his way, and is ALLOWED to continue raising the debt ceiling unchecked, and IF American economy comes crashing down on us; THEY WILL ALL HAVE FAILED US. It is the JOB of the GOP in leadership to PREVENT this from happening. I do not give them a pass. I will make it my JOB to provide you with names of all who had a hand in this, and they WILL dearly pay with THEIR OWN JOBS. It is my DUTY to inform you, as it is your duty to become informed. You all better open your eyes, and wake up and smell the economic trouble coming your way.  Giving President Obama unchecked, full reign over this debt ceiling is the LAST thing we need. Our national debt is $14.3 TRILLION.  The “official” unemployment rate is over 9%, but it is more like 19.8% in North Carolina, and closer to 27% in Florida. Which means if these are the real numbers in these two states, you can believe the numbers are skyrocketing nationwide. Our country’s deficit is increasing at a rate of nearly $4 BILLION per day. That’s BILLION with a B.

How bad do things have to be before our politicians start showing they are SERIOUS about solving our problems? I can hardly imagine the political fallout if such a deal goes through. Republicans were put back in power during the last election to STOP the runaway spending in Washington, D.C. and stand up to President Obama,  not cut “deals” or run away from a fight or hide with their tail between their legs.

If they cave on their Tea Party mandate now,  I believe the GOP will pay a severe price at the ballot box in 2012.  President Obama knows it too. He knows the American people are outraged and demanding true change.
But he’s also desperate to keep the government’s out-of-control spending machine rolling along, so he’s eager to create yet another meaningless deal that provides him with some campaign trail rhetoric about supposed “change.”

Any “deal” to raise the debt limit that doesn’t include “Cut, Cap, and Balance” needs to be declared dead on arrival.

It is time for you the true patriot who really wants change to press and reform Washington. CALL YOUR LEADERS, or sit back and wait for the roof to cave in on you. It’s up to you.