In a video recorded in Rochester, NY, Black Lives Matter protesters carrying BLM flags and chanting "Black Lives Matters" can be seen rioting and vandalizing at least one restaurant. It's unclear in the video, posted on Twitter Friday night, why the mob targeted the business or businesses. At one point, some protesters seem to be chanting, "If you don't give us our s***, We shut this down!" There is no sign of law enforcement protecting residents or property as tables and chairs are thrown or overturned, glass is broken, and diners are chased away from their meals.

Both the German people and Europe’s Jews paid the ultimate price for not confronting the evil when it presented itself. Why are we making that exact same mistake right now?

I have been warning you for months now that if you live in areas of the country that are controlled by Democrats, you need to either get you and your family out now, or take steps to protect yourselves when the BLM terrorists come to your door. We have the 2nd Amendment for a reason, what we are seeing being played out all across America right now is one of those reasons.

If you study the rise of Adolf Hitler and Nazi Germany, you will see amazing parallels between that and ANTIFA and Black Lives Matter in 2020. The evil genius of Hitler was that he was able to take a disparate collection of unconnected agitators, create a vast network to connect them all, with the end result being that he was able to create his army of domestic terrorists that was larger than the German national military forces. This is what is happening in America right now, the domestic terror groups are combining, and just like Hitler’s Brown Shirts, they are terrorizing the population into submission.

#BLMTerrrorists and #AntifaTerrorists are trying to gain entry into residents’ apartment buildings.

The corrupt and Liberal main stream media will not report on this, but we will, and we will give you video proof of everything we tell you. America is at war, whether you think we are or not, whether you want to be or not, war has arrived. The German people were too afraid of the Brown Shirts, so they did nothing to stop it. The Jews did not believe their lives would ever be in danger in Germany. Both the German people and Europe’s Jews paid the ultimate price for not confronting the evil when it presented itself. Why are we making that exact same mistake right now? It will end any different for us than it did for them if we stand by and do nothing. Are you listening?

As you watch these videos of ANTIFA and Black Lives Matter terrorists, chew on this 1926 quote from a letter Adolf Hitler wrote about the need to increase the power and visibility of his Nazi Brown Shirts terrorist organization:

“The formation of the SA does not follow a military standpoint, other than what is expedient to the Party. In so far as its members are trained physically, the emphasis should not be on military exercises but sporting activity. Boxing and ju-jitsu have always seemed more important to me than any bad, semi-training in shooting… What we need are not one or two hundred daring conspirators, but a hundred thousand fighters for our ideology. The work should be carried on not in secret, but in mighty mass processions. Not through daggers and poisons and pistols can the way be opened for National Socialism, but through the conquest of the streets. We have to teach Marxism that the future master of the streets is National Socialism, just as one day it will be the master of the State.” READ MORE 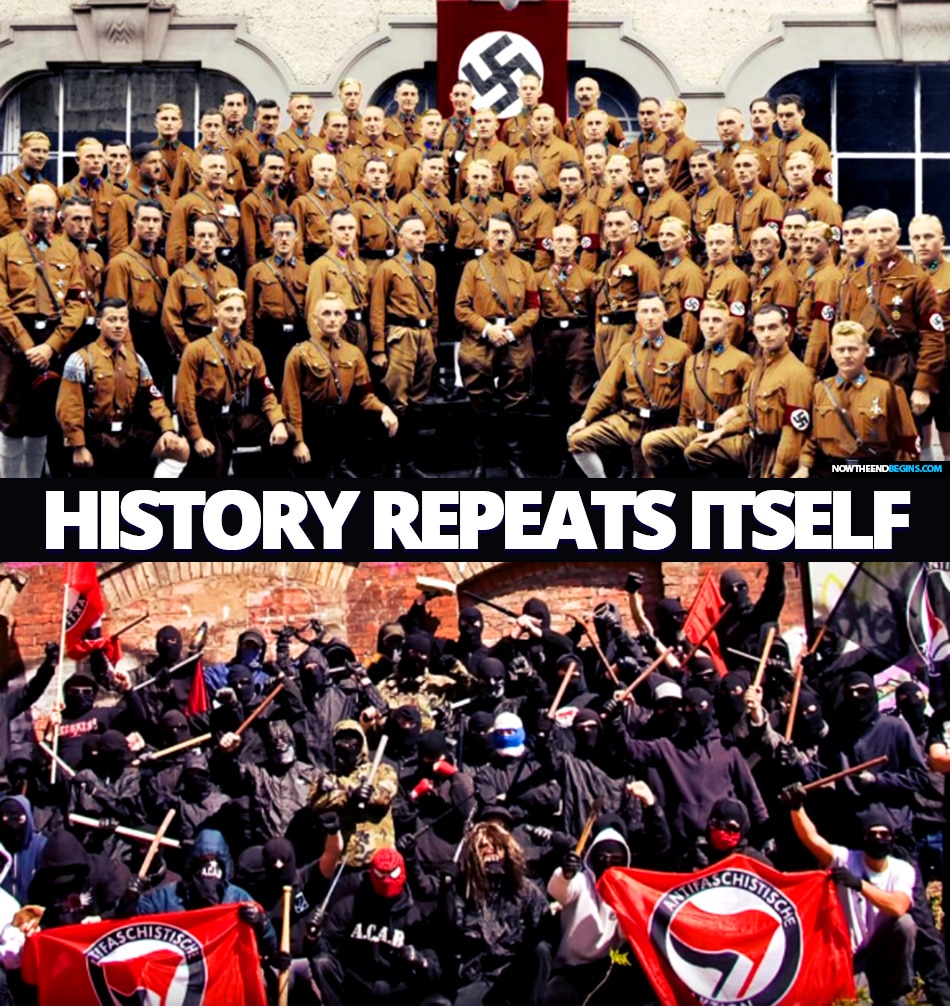 FROM SHARYL ATTKISSON: In a video recorded in Rochester, NY, Black Lives Matter protesters carrying BLM flags and chanting “Black Lives Matter” can be seen rioting and vandalizing at least one restaurant.

It’s unclear in the video, posted on Twitter Friday night, why the mob targeted the business or businesses. At one point, some protesters seem to be chanting, “If you don’t give us our s***, We shut this down!”

There is no sign of law enforcement protecting residents or property as tables and chairs are thrown or overturned, glass is broken, and diners are chased away from their meals.

One protester is heard saying, “We’re shutting the party down!” as she orders white diners to leave the restaurant. She also yells, “There’s no need to run, nobody is going to touch you, calm down!” as glass is heard breaking and rioters swarm the area. READ MORE

This is what the face of ‘social justice’ looks like in 2020, it is the face of evil. If YOU live in a town, city or state that is run by Democrats, take steps NOW to protect yourselves. The 2nd Amendment is there for a reason, use it.

Comparing ANTIFA to the Brown Shirts

What began as a typical Black Lives Matter protest with a overly dramatic black woman on a bullhorn, in front of predominantly white virtue signaling New Yorkers on Time Square spread quickly to Rochester – the home city of the mentally ill Daniel Prude, who died after an arrest. Rioters went on a “shut it down” campaign, smashing up restaurants, chasing off guests – and they also started setting fires in the streets. This is the second night in a row with clashes between what most certainly looks like ANTIFA & the Rochester Police Department.