Software billionaire Bill Gates, who previously has advocated the reduction of the human population through the use of vaccines, and his wife Melinda marked the 100th year since the First International Eugenics Congress in London with a “family planning” summit with abortionists and the United Nations.

Definition of Eugenics: Study of human improvement by genetic means. The first thorough exposition of eugenics was made by Francis Galton, who in Hereditary Genius (1869) proposed that a system of arranged marriages between men of distinction and women of wealth would eventually produce a gifted race. The American Eugenics Society, founded in 1926, supported Galton’s theories. U.S. eugenicists also supported restriction on immigration from nations with “inferior” stock, such as Italy, Greece, and countries of eastern Europe, and argued for the sterilization of insane, retarded, and epileptic citizens. Sterilization laws were passed in more than half the states, and isolated instances of involuntary sterilization continued into the 1970’s. source – Merriam Webster 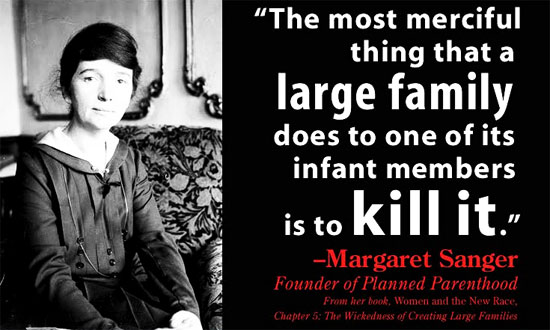 Margaret Sanger is the hero of the left, the mother of abortion. She easily could have been a Nazi because her views were very similar with Hitler’s Nazis.

Eugenics and Planned Parenthood: We recoil in horror when shown newsreel footage of the atrocities done by the Nazis during WWII, and rightly so. The Nazis under Hitler were one of the most inhumane and barbaric people ever to walk the face of this earth. They killed, tortured and mutilated their fellow human beings just for the sheer pleasure of it. Nazis believed that they could create an Aryan “master race” by breeding ‘pure Germans’ with each other while at the same time expunging from the population rolls all those they deemed as unfit to live. But these freakish notions did not die with Hitler. They are alive and well in every Planned Parenthood office across America. 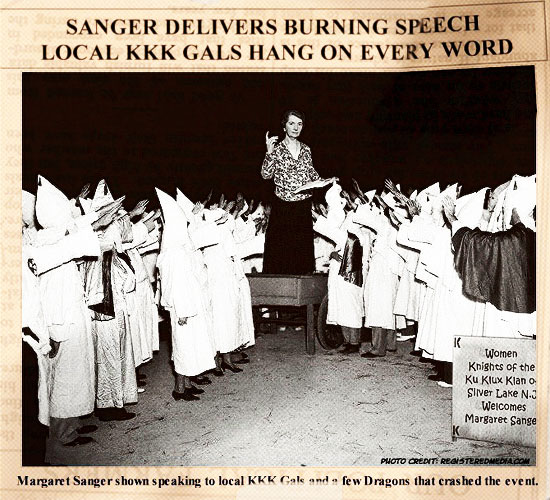 “I accepted an invitation to talk to the women’s branch of the Ku Klux Klan…I saw through the door dim figures parading with banners and illuminated crosses…I was escorted to the platform, was introduced, and began to speak…In the end, through simple illustrations I believed I had accomplished my purpose. A dozen invitations to speak to similar groups were proffered.” (Margaret Sanger: An Autobiography, P.366)

The Negro Project: Planned Parenthood, founded by Margaret Sanger, has it’s roots deeply steeped in Nazi ideals. Sanger was, first and foremost, a eugenicist – one who believed in the inferiority of non-white races. In 1939, she proposed the infamous “Negro Project,” a plan developed at the behest of public-health officials in southern states, where she writes, “the most successful educational approach to the Negro is through a religious appeal. We do not want word to go out that we want to exterminate the Negro population and the Minister is the man who can straighten out that idea if it ever occurs to any of their more rebellious members.” Sanger also attempted to set up birth-control clinics in poor New York City neighborhoods to target “Blacks, Hispanics, Slavs, Amerinds, Fundamentalists, Jews and Catholics.”

Sanger was closely tied to Ernst Rudin, who served as Hitler’s director of genetic sterilization. An April 1933 article by Rudin – entitled “Eugenic Sterilization: An Urgent Need” – for Sanger’s monthly magazine, The Birth Control Review, detailed the establishment of the Nazi Society for Racial Hygiene and advocated its replication in the United States.

Eugenics and Bill Gates: Software billionaire Bill Gates, who previously has advocated the reduction of the human population through the use of vaccines, and his wife Melinda marked the 100th year since the First International Eugenics Congress in London with a “family planning” summit with abortionists and the United Nations. 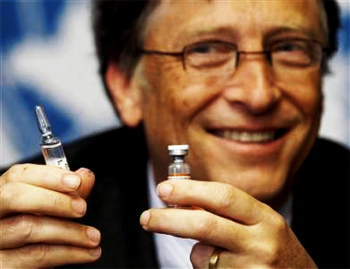 Bill Gates today carries on the work espoused by Adolf Hitler and Margaret Sanger – Population control leading to the establishment of a master race.

The July 11 event, co-hosted by the United Kingdom Department for International Development, included organizations such as Planned Parenthood, Marie Stopes International and the U.N. Populations Fund, as well as the Bill and Melinda Gates Foundation.

Critics pointed out the summit was held 100 years after the July 1912 eugenics conference led by Leonard Darwin, the son of Charles Darwin, and dedicated to Darwin’s half-cousin Francis Galton. Galton invented the term eugenics to promote the idea that strategic breeding would improve mankind.

According to Christian Voice, a ministry that analyzes current events and acts on Scriptural instructions for “a better way, God’s way,” the 1912 event promoted the “notion that economics can be improved by decreasing the surplus population,” based on the theories of Thomas Malthus.

The 17th century luminary suggested that the poor were “draining the world’s resources,” and a solution would be “to introduce policies specifically designed to bring death to large numbers of peasants.”

Gates made his remarks to the invitation-only Technology, Entertainment and Design 2010 Conference in Long Beach, Calif. His February address was titled “Innovating to Zero!”

He presented a speech on global warming, stating that CO2 emissions must be reduced to zero by 2050. Gates said every person on the planet puts out an average of about five tons of CO2 per year.

“Somehow we have to make changes that will bring that down to zero,” he said. “It’s been constantly going up. It’s only various economic changes that have even flattened it at all. So we have to go from rapidly rising to falling, and falling all the way to zero.”

“Let’s look at each one of these and see how we can get this down to zero,” he said. “Probably one of these numbers is going to have to get pretty near to zero. That’s a fact from high school algebra.”

Discussing the “P,” or population portion of the equation, he stated, “Let’s take a look. First we got population. The world today has 6.8 billion people. That’s headed up to about 9 billion. Now if we do a really great job on new vaccines, health care, reproductive health services, we could lower that by perhaps 10 or 15 percent” [emphasis added].

Further, he said it would not be hard to keep track of children, the vaccines they’ve had and when they’re due for another.

He said cell phone technology could be used to register every birth around the globe and track children to make sure they have been vaccinated as government advisers urge.

The massive effort was discussed by Bill Gates at a mHealth Summit, which delved into the issues of technology and health. According to Natural News, Gates told the conference that the goal is a lower population, and using vaccines to improve early childhood health is a step in that direction. “That sounds paradoxical,” he said. “The fact is that within a decade of improving health outcomes, parents decide to have [fewer] children.”

“If you could register every birth on the cell phone, get fingerprints, get a location, then you could take the systems where you go around and make sure the immunizations happen,” he said. “Run them in a more effective way.”

WND also reported in May 2009 when Bill Gates joined some of the richest men and women in the world meeting secretly in New York to talk about using their vast wealth to bring the world’s population growth under control. source – WND