From the moment his name was announced, thunderous applause and cheering filled the House chambers as the Prime Minister of Israel, Benjamin Netanyahu, made his way to the podium.... 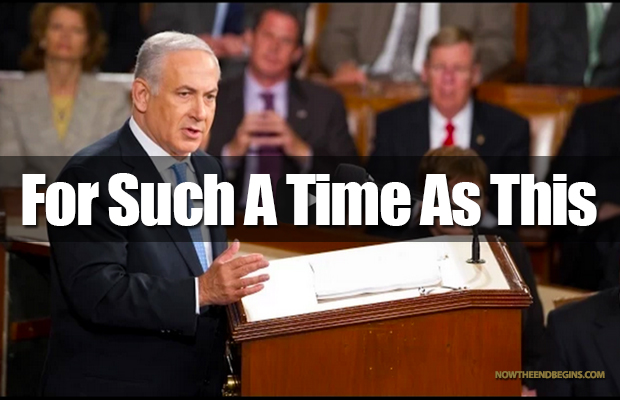 From the moment his name was announced, thunderous applause and cheering filled the House chambers as the Prime Minister of Israel, Benjamin Netanyahu, made his way to the podium.

“I bring near my righteousness; it shall not be far off, and my salvation shall not tarry: and I will place salvation in Zion for Israel my glory.” Isaiah 46:13 (KJV)

In his opening remarks, Netanyahu made sure to give a shout out to Harry Reid, someone who clearly cannot stand him. This speaks volumes about the class act that is Benjamin Netanyahu. After opening remarks, he launched immediately into why he was there: for the peace and safety of Israel.

The Prime Minister then thanked America for it’s amazing level of support since the regathering of Israel in 1948, and acknowledged the special relationship between the two nations.

Recalling the biblical story of Queen Esther who was chosen to save her people “for such a time as this”, Netanyahu went right into the main reason for his visit, the ever-present threat of Iranian nuclear weapons that, once completed, will be pointed directly at Israel. He listed point after point calling attention to the brutality of Iran, and the deadly threat they pose not only to Israel, but to American interests around the world as well.

Netanyahu’s speech starts at the 22:00 mark:

“We must all stand together to stop Iran’s march of conquest, subjugation and terror” he said to a rousing applause.

As Netanyahu went on pointing out the evil of the Iranian regime, it tarnished any hopes at all that Obama might have about getting American support for further “peace talks” with Iran as has been his clearly stated goal. One can only imagine Obama sitting watching this speech through gritted teeth and sky-high blood pressure levels.

“As far as ISIS and Iran are concerned, the enemy of your enemy is your enemy” was possibly the best line of the speech, instant classic!

Netanyahu then spent the next 10 minutes ripping Obama’s proposed nuclear deal with Iran to absolute shreds. Any chances that Obama might have had in getting it passed vanished like ice in the noonday sun.

Netanyahu’s speech was clear, concise and hyper-targeted to it’s goal of calling attention to the Iranian nuclear crisis this world faces. What Obama will do in retaliation remains to be seen, but you can be sure of one thing.

Whatever Obama’s response will be, it will be pro-Iranian and anti-Israel.