Benghazi + Fast And Furious + Huge National Debt = Obama As Person Of The Year?

Sad, but true...Barack Obama is both the symbol and the architect of this new America.... 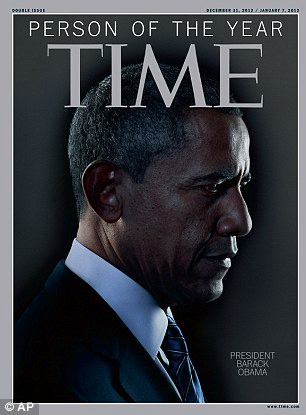 Hey now, this is GREAT! Someone please call “former” Libyan Ambassador Chris Steven’s mom and tell her the good news!

Oh, the scandals of the Obama presidency, where shall we start? Do we start with the Americans that were killed in the Fast and Furious gun-running scandal? Or maybe we talk about how Obama financed the Muslim Brotherhood to take over Egypt? Perhaps we need to revisit the Benghazi massacre and subsequent cover-up. 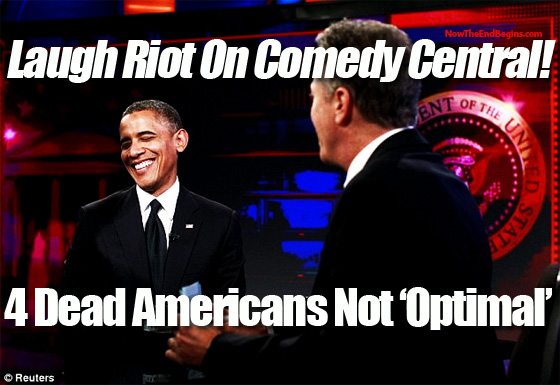 Not optimal: President Barack Obama, pictured left, discussed the killing of four men in Benghazi while speaking to Jon Stewart, right, on The Daily Show

From Daily Mail UK: President Barack Obama has been named TIME’s Person of the Year for 2012, allowing him the honor for the second time in four years.

Time got this cover right, though. Cold, dark and menacing is exactly how Obama should always be portrayed.

The magazine cited the president’s historic re-election last month as symbolic of the nation’s changing demographics amid the backdrop of high unemployment and other challenges.

‘He’s basically the beneficiary and the author of a kind of new America – a new demographic, a new cultural America that he is now the symbol of,’ TIME editor Rick Stengel said as he announced the choice on the Today show on Wednesday.

‘He won re-election despite a higher unemployment rate than anybody’s had to face in basically 70 years. He’s the first Democrat to actually win two consecutive terms with over 50 per cent of the vote. That’s something we haven’t seen since Franklin Delano Roosevelt.’

The ‘Person of the Year’ accolade is given to the person or thing that has most influenced the culture and news throughout the year for good or for ill.

Obama was named as Person of the Year in 2008, with Federal Reserve Chairman Ben Bernanke, Facebook founder and CEO Mark Zuckerberg and ‘The Protester’ filling the years in between.

This year, Obama edged out Malala Yousufzai, a Pakistani girl shot in the head by the Taliban for advocating girls’ education, for the honor  She was named as runner up.

In its latest edition and cover story, TIME explained its decision to name Obama as the winner.

‘We are in the midst of historic cultural and demographic changes, and Barack Obama is both the symbol and in some ways the architect of this new America,’ the editors wrote. source – Daily Mail UK