Affleck responds by saying: 'Are you the person who understands the officially codified doctrine of Islam? ... 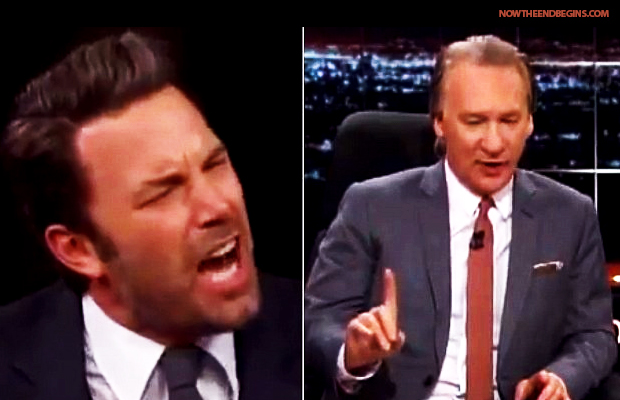 The sheer absurdity of defending Islam as told by liberals

As surrealistic as this is going to sound, we agree with ultra-liberal Bill Maher on this one. About Islam, he is vastly right in how he describes it. But the real gem in this story is how Ben Affleck goes absolutely crazy as he attempts to defend Islam as a ‘religion of peace’. More powerful then Affleck’s words, however, were the amazingly-intense facial expressions he made. That told the real story.

Ben Affleck clashed with Bill Maher during a heated discussion on Islam where the controversial TV host claimed being a member of the religion is like being in the Mafia. The Oscar-winning director was also appalled when author and guest on the talk show Sam Harris said the Muslim faith was the ‘motherload of bad ideas‘.

The conversation started with Harris, who was promoting his book Waking Up, by saying: ‘Liberals have failed on the topic of theocracy. They’ll criticize white theocracy, they’ll criticize Christianity. They still get agitated over the abortion clinic bombing that happened in 1984.

‘The crucial point of confusion is we have been sold this meme of Islamaphobia – where every criticism of the doctrine of Islam is conflated with bigatory towards Muslims as people. Which is intellectually ridiculous.

Affleck responds by saying: ‘Are you the person who understands the officially codified doctrine of Islam? Harris then returns by saying ‘I am actually well educated in this subject’ before Affleck says: ‘You are saying that Islamaphobia is not a real thing?’

Maher then says: ‘That’s not what we are saying’ before Harris adds: ‘We have to be able to criticize bad ideas and Islam is the motherload of bad ideas.’ The Gone Girl star then sits back in his chair in shock and adds ‘It’s an ugly thing to say.’