Fearing an Egyptian-style inferno, Bahrain’s security forces have moved aggressively to douse a political brush fire that burned for several days in the capital. At least five people were... 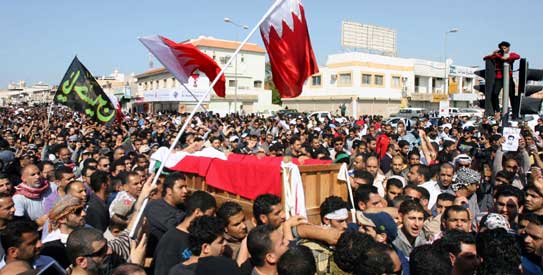 Shiite Muslims in Bahrain carry the coffin of protester killed in clashes with police.
by Geoffrey Grider February 17, 2011
NOW THE END BEGINS SHARE:

Sectarian divide is at the heart of the unrest in Bahrain. The Shiites are trying to rise up, and the Sunnis are scared to death. An overthrow of the Sunni rule in Bahrain could have a pretty negative impact on the Middle East and could cost the United States its Persian Gulf base located within the tiny Arab nation. A Shiite takeover could create what has been called the Shia crescent and it would run from Iran, through Iraq, Lebanon, and into the Gulf; this could turn Bahrain into an extension of Iranian influence. At this point, the Shiite protesters are mainly fed up with the lack of jobs and housing and have not been calling for an overthrow of the monarchy, but now the heavy hand of the Sunnis has dropped, and this very well could make the situation even worse.

“It’s not like a domestic police force or army,” said Barry Rubin, director of the Global Research in International Affairs Center in Herzliya, Israel. “These guys are paid to beat people such as these protesters and to do it without feeling.”

Shiite Muslims in Bahrain carry the coffin of a fellow protester killed in clashes with police.

Fearing an Egyptian-style inferno, Bahrain’s security forces have moved aggressively to douse a political brush fire that burned for several days in the capital. At least five people were killed and hundreds injured when the protest camp set up in Manama’s Pearl Square was levelled early Thursday morning.

It was a familiar pattern: In each of the past four decades, whenever people – usually Shia Muslim Bahrainis – protested too vehemently for political or economic reform, the government summoned the same forces.

And the forces have been specially chosen for the task. They are almost entirely made up of foreign nationals, mostly Sunni Muslims from Pakistan; often with contempt for Shiites whom they regard as heretics. The forces’ officers hail from Bahrain, Saudi Arabia or Jordan.