Egyptian activists destroyed a wall around the Israeli embassy and set police cars on fire in Cairo on Friday after thousands demonstrated at Tahrir Square to push for a... 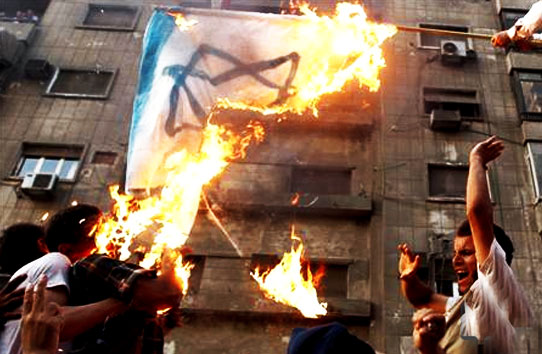 (Reuters) – Egyptian activists destroyed a wall around the Israeli embassy and set police cars on fire in Cairo on Friday after thousands demonstrated at Tahrir Square to push for a timetable for reforms and an end to military trials for civilians.

Activists who spearheaded an uprising that ousted President Hosni Mubarak on February 11 have been piling pressure on the ruling military council to fix a date for parliamentary and presidential elections and to get rid of senior officials who served under Mubarak.

Thousands converged on Tahrir Square, the epicenter of the pro-democracy protests that toppled Mubarak, after Friday prayers for what was billed as “Correcting the Path” protests.

Some later marched to the opposite bank of the Nile in Giza. Demonstrators used hammers, large iron bars and police barricades to tear down the wall, erected this month by Egyptian authorities after daily protests over the killing of five Egyptian border guards in Sinai.

Protesters scaled the embassy building, removed the Israeli flag for the second time in less than a month and burned it.

“This action shows the state of anger and frustration the young Egyptian revolutionaries feel against Israel especially after the recent Israeli attacks on the Egyptian borders that led to the killing of Egyptian soldiers,” Egyptian political analyst Nabil Abdel Fattah told Reuters.

Egyptian police stood aside as activists tore down the concrete wall to the cheers of hundreds of demonstrators.

“It is great that Egyptians say they will do something and actually do it,” Egyptian film director and activist Khaled Youssef said, standing among the protesters outside the embassy.

“They said they will demolish the wall and they did … the military council has to abide by the demands of the Egyptian people,” he said. source – Reuters