The Sunday Assembly describes itself as “a godless congregation that will meet on the first Sunday of every month to hear great talks, sing songs and generally celebrate the... 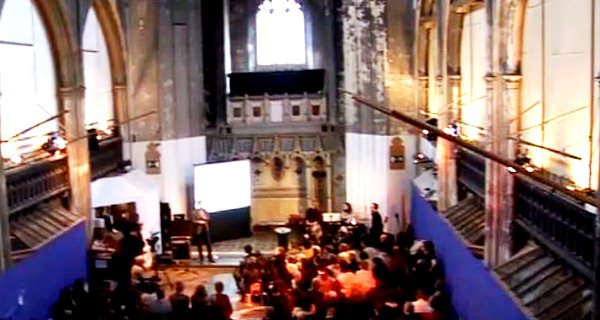 Originally, Jones and Evans hoped that 50 people would attend the first service in London. Instead, 200 congregants showed up, with this number growing to 300 at the second meeting.
by Geoffrey Grider February 14, 2013
NOW THE END BEGINS SHARE:

“Nevertheless the foundation of God standeth sure, having this seal, The Lord knoweth them that are his. And, Let every one that nameth the name of Christ depart from iniquity.” 2 Timothy 2:19

An idea who time has truly come

We live in what the bible calls the “last days”, otherwise known as the end times. The scripture has warned for nearly 2,000 years that it would be a time of great and open apostasty, where people would be on the throne and not the Holy God of Israel. The “time of the mockers” is here, and for the true believer in Jesus Christ, things are going to get pretty rough.

From The Blaze: The concept of an atheist church is certainly a curious one. An ideological movement that rejects the existence of a higher power would generally seem, at least on the surface, to shun houses of worship. However, British comedians Sanderson Jones and Pippa Evans recently decided to launch The Sunday Assembly, an atheist church in the United Kingdom that has quickly gained hundreds of members and international attention. Already, the response has been so monumental that church leaders are planning to travel to Scotland for special performances.

Originally, Jones and Evans hoped that 50 people would attend the first service in London. Instead, 200 congregants showed up, with this number growing to 300 at the second meeting.

The Sunday Assembly describes itself as “a godless congregation that will meet on the first Sunday of every month to hear great talks, sing songs and generally celebrate the wonder of life.” It provides non-believers with the opportunity to experience church community without buying into God and other related elements that secularists overwhelmingly reject. The church’s success after just one month has been mind-boggling.

Perhaps most striking are the patterns The Sunday Assembly follows, as it uses traditional church practices and adapts them to a non-believing audience. Take, for instance, this recent description from The Guardian:

The Sunday Assembly may be godless, but a churchgoer who stumbled through the wrong door would find much they recognised.

The service opens with a song, led by Evans and an enthusiastic band at the front; instead of a hymn, however, it is “Don’t Stop Me Now” by Queen (“We’ve chosen something that allows hamming it up to the max”). The service features a reading, a moment of reflective silence, even a collection to pay for the rental of the church, during which people are invited to turn in the pews and greet those sitting beside and behind them. The plan in future is to engage members in community-based good works.

There is also a sermon, of sorts, on the day’s theme of “wonder”, which sees Dr Harry Cliff, a particle physicist from Cambridge, talking about Dirac’s equation predicting antimatter (“the most amazing theory in history”) and the enormous statistical odds against the universe existing in the first place. The congregation then stands to sing Superstition by Stevie Wonder.

“And the rest of the men which were not killed by these plagues yet repented not of the works of their hands, that they should not worship devils, and idols of gold, and silver, and brass, and stone, and of wood: which neither can see, nor hear, nor walk: Neither repented they of their murders, nor of their sorceries, nor of their fornication, nor of their thefts.” Revelation 9:20,21

The church’s founders believe that they have tapped into something that has gone unsatisfied for quite some time in the non-theist community: The urge for a sense of togetherness. This is a phenomenon in the atheist community that the TheBlaze has analyzed extensively. Examining past events that activists have organized like the Reason Rally and Rock Beyond Belief, it is clear that many non-believers are seeking community and a cohort of others who, like them, reject belief in a higher power.

“It is intended to tap into a feeling of wonder, that atheists have like believers, to challenge beliefs and give you something to think about for the week ahead,” Jones recently explained. “People also love to feel part of something and in a sense you lose that when you lose God. Our view is you don’t need to believe to get that back.”

As the church grows, one wonders whether others will sprout up in Europe and across the globe. As atheists seek community and use theistic blueprints to achieve their goals, they’ll likely be faced with increased scrutiny when it comes to denials that atheism has become a faith system in its own regard.

What do you think about The Sunday Assembly? Let us know in the comments section, below. source – The Blaze