The Canadians are doing what the U.S. has not been able to accomplish: Eliminating the money-losing penny. The Canadian government has announced that it will stop distributing the Canadian penny beginning in the fall, with the gradual goal of removing it from circulation. 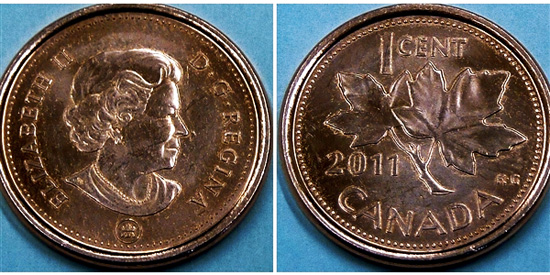 The Canadian penny will soon be a relic of the past. (Michel Viatteau / AFP - Getty Images)
by Geoffrey Grider March 30, 2012
NOW THE END BEGINS SHARE:

The government said people can continue to use pennies for as long as they want, and non-cash transactions will still go to the penny.

RELATED STORY: Bible Prophecy In The News As Sweden Moves To Be World’s First Cashless Country

The Canadians are doing what the U.S. has not been able to accomplish: Eliminating the money-losing penny. The Canadian government has announced that it will stop distributing the Canadian penny beginning in the fall, with the gradual goal of removing it from circulation.

The Canadian penny will soon be a relic of the past. (Michel Viatteau / AFP – Getty Images)

The move, unveiled as part of the Canadian government’s overall budget proposal, comes down to cold, hard cash. That is, the cash that can be saved by removing the penny from circulation.

The government said it expects it can save about $11 million Canadian dollars (about $11 million USD) a year by not supplying the penny, because the cost to produce a penny is more than the penny’s face value.

The Canadian government said in a release that, by contrast, the other coins it makes are worth more than the cost of production.

The government said people can continue to use pennies for as long as they want, and non-cash transactions will still go to the penny. But as they gradually are removed from circulation, people should begin rounding to the nearest denomination. The government laid out ways to do that.

The United States is in the same situation when it comes to coin making, but we have yet to eliminate any of our beloved coins.

It takes about 2.4 cents to make a U.S. penny, and a whopping 11.18 cents to make a nickel. That’s why the U.S. Treasury secretary has proposed cheaper manufacturing and administrative methods aimed at reducing production costs.

The Canadians said they are joining the ranks of other countries that have removed their lowest-denomination coin from circulation, including Australia, Norway, Switzerland and the United Kingdom. source – MSNBC