As Russia Bombs Syria, Obama Pulls US Aircraft Carrier Out of Persian Gulf

As Russian warships rain down cruise missiles as part of its military strike in Syria, there's now a glaring absence in the region: For the first time since 2007,... 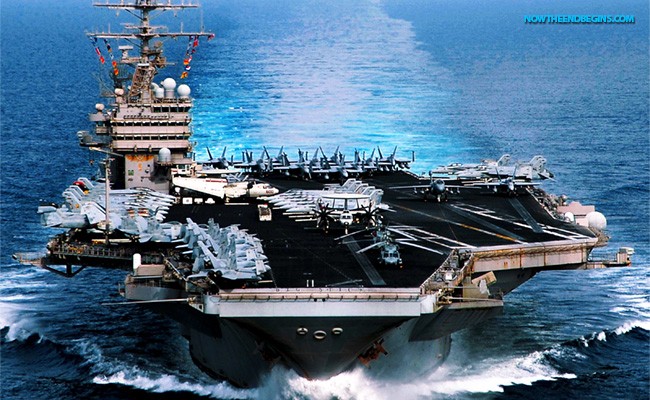 As Russian warships rain down cruise missiles as part of its military strike in Syria, there’s now a glaring absence in the region: For the first time since 2007, the U.S. Navy has no aircraft carrier in the Persian Gulf.

EDITOR’S NOTE: With each passing day, it becomes increasingly more obvious that the Muslim-raised Obama is intentionally staying out of the rapidly-changing situation in the Middle East to allow Russia to continue to dominate the scene. By ordering home the USS Theodore Roosevelt, the United States will have no aircraft carriers in the Persian Gulf for the first time since 2007. Did you think that you would ever live to see the day where America would lay down powerlessly before our enemies? That day is today, welcome to Obama’s America.

Military officials said Thursday that they’ve pulled the USS Theodore Roosevelt, which is home to about 5,000 service members and 65 combat planes. The ship officially exited the gulf around 11 p.m. ET. The “temporary measure” is also the result of mandatory budget cuts.

The USS Theodore Roosevelt — a massive, nuclear-powered aircraft carrier — has had a central role in the fight against ISIS in Iraq and Syria since August 2014, when the U.S.-led coalition started bombing the Islamist extremists.

The lack of a U.S. presence in the gulf comes as Russia is escalating its actions in the region and began pounding targets in Syria last week with airstrikes. Russian officials say they’re trying to obliterate ISIS, although the U.S. and its allies say they’re instead hitting rebel fighters who oppose Syrian President Bashar Assad, a Russian ally.

Russia remains a wild card in the region — and the absence of an American aircraft carrier is being noticed, said Peter Daly, a retired Navy vice admiral and CEO of the U.S. Naval Institute.

“The most important thing you need a carrier for is for what you don’t know is going to happen next,” Daly told NBC News.

That was especially important during the height of the wars in Iraq and Afghanistan, when the Navy often had two carriers operating in the region. The combat planes can fly into war zones and generally act as a show of force to Iran and other nations during tense standoffs.

The USS Theodore Roosevelt — a massive, nuclear-powered aircraft carrier — has had a central role in the fight against ISIS in Iraq and Syria since August 2014, when the U.S.-led coalition started bombing the Islamist extremists.

A Navy official told Washington lawmakers in July that the lack of a carrier was imminent — and could potentially hamstring operations.

“Without that carrier, there will be a detriment to our capability there,” Adm. John Richardson said during a Senate Armed Services Committee hearing, prior to his confirmation in the Navy’s top post. source