Barack Hussein Obama ignored Easter yesterday. He issued no statements of any kind, no "Happy Easter", no nothing. By comparison he has issued glowing, effusive statements of praise for... 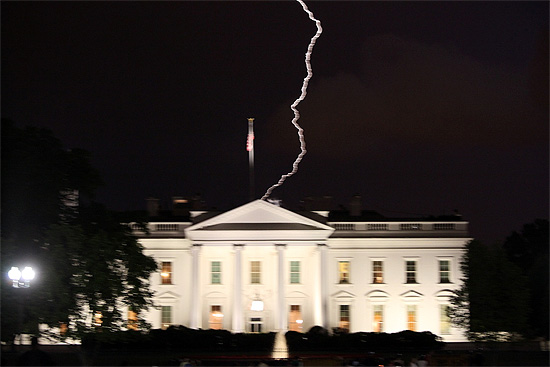 Better buckle up, Barry...judgment from the Almighty is coming.
by Geoffrey Grider April 25, 2011
NOW THE END BEGINS SHARE:

Barack Hussein Obama ignored Easter yesterday. He issued no statements of any kind, no “Happy Easter”, no nothing. By comparison he has issued glowing, effusive statements of praise for each and every Muslim holiday since he took office. Hasn’t missed one of them. So it is quite interesting that yesterday as believers celebrated the Risen Lord Jesus around the the globe, that the God of Heaven who controls the wind and the weather chose to strike the White House with lightning. And something tells me that there’s more coming…stay tuned.

“A storm rapidly materialized in the Southern sky, and swept from the National Mall toward the White House. Instantly, there seemed to be lightning bolts dropping out of the heavens all around 1600 Pennsylvania Avenue–and the wind kicked up dramatically.

Better buckle up, Barry...judgment from the Almighty is coming.

A spectacular downpour started as the lightning built, with no preliminary drops; one moment it was dry, the next there was a gushing, blowing, massive water dump.” source – Obama FoodoRama