As More Cops Die On The Streets, Louis Farrakhan Calls For War Against America

Louis Farrakhan said for real racial justice to occur the way God intended the whole American system “has to be taken down” as evidenced by President Barack Obama being... 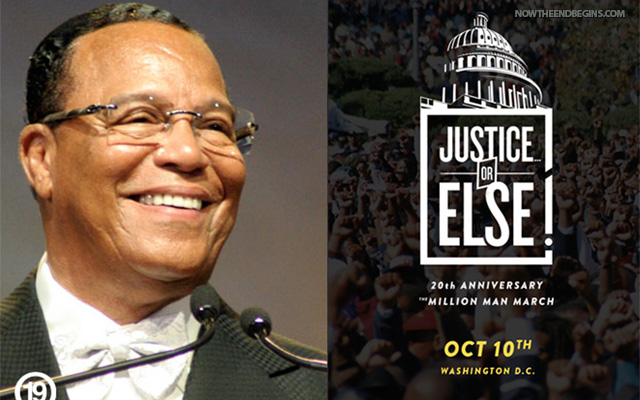 FARRAKHAN: THE AMERICAN SYSTEM HAS TO BE TAKEN DOWN

EDITOR’S NOTE: Obama and the Race Baiters have been planting the evil seeds of racial hate for the past 7 years now, and it’s beginning to bear it’s evil fruit. George Soros spent 33 million dollars last year to keep the Ferguson race riots going at a fever pitch, and outbreaks have spread to many major cities across America. This is what Obama and the Left dearly want, civil war between Americans and the blood running in the streets. Do not allow the Left to twist your thinking and inspire you to commit acts of racial hatred, be better than that. The vast majority of police officers across this nation do a great job, and we need them on the front lines to protect us. Next time you see a cop, go tell them “thank you” for risking their lives to keep us safe on a daily basis.

A Madison police officer was confronted by a crowd and punched after a street fight on Prairie Road Wednesday night, according to a release from Madison police.  The officer stopped in the area of Prairie Road and Jacobs Way around 6:20 p.m. after spotting a large number of people in the street. He said that as he approached he saw a woman punch a man in the face, and he could see that the woman had a can of pepper spray. The officer said that as he went to arrest the woman he was surrounded by a crowd that was voicing anti-police sentiments, including “We need to start killing these officers.”

Friday in Cleveland, OH at a “Justice Or Else!” rally for “10.10.15,” the 20th anniversary of The Million Man March gathering being held in Washington, D.C. on October 10, 2015, Louis Farrakhan said for real racial justice to occur the way God intended the whole American system “has to be taken down” as evidenced by President Barack Obama being elected and still not being able to change anything.

Farrakhan discussed the case in Cleveland on November 29, 2012 after a 25-minute high speed car chase, 13 police officers fired 137 rounds into the car killing Melissa Williams and the driver Timothy Russell.

Farrakhan said, “No man has the right to take your life and then deny you due process for the address of your grievances. I watched that judge with Melissa Williams Mr. Russell. Shot at a vehicle a 137 times. That’s a hell of a lot of shooting. Now these people are supposed to be marksmen. Any of you that hunt when you go to hunt a deer, when you get him in your site you know exactly where to put the bullet so it drops him. And as he’s bleeding out you catch him, go get it because you are going to eat him. But if you shot him a 137 times ant no sense in trying to eat that one.”

He continued, “See this man is a hunter, but he is a liar and a murderer and the whole system backs him up – the whole system.  See this is a system that has to be taken down in order for the people, black, brown, red yellow and white to experience what God wants every human being to experience. This system can’t bring it. It’s just not constructed that way. So how many generations more are we going to sit around saying ‘things are getting a little better now. The Lord done bless us. We has a black president.’ Over a white corporation that he probably don’t own no stock in. He has to maneuver the country for the stock broker, for the real power.”

“When you vote a black man in office thinking he is your savoir within a short while he will show you ‘I’ll do the best I can but that is very little,’” he added. source

Hey, Louis Farrakhan, “justice or else” what?