As America Sleeps, The Dark Days Ronald Reagan Warned Us About Have Arrived

The times where our freedoms would be taken away have arrived. These are the days Ronald Reagan warned us would come if we did not remain vigilant. We haven't... 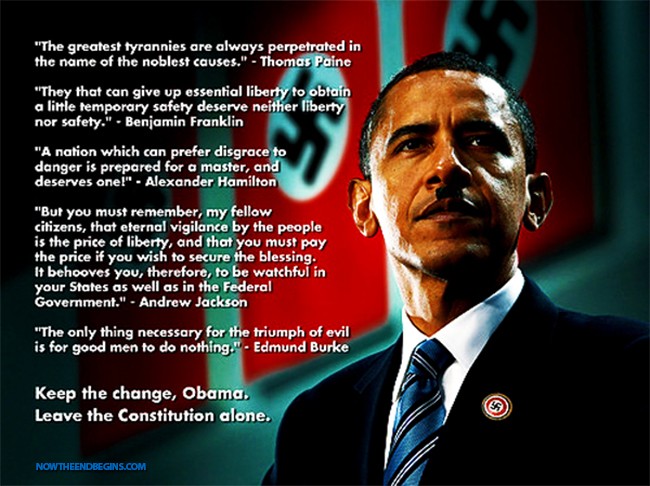 These are the days Ronald Reagan warned us would come if we did not remain vigilant. We haven’t been, and they are here.

“Freedom is never more than one generation away from extinction. We didn’t pass it to our children in the bloodstream. It must be fought for, protected, and handed on for them to do the same, or one day we will spend our sunset years telling our children and our children’s children what it was once like in the United States where men were free.” – Ronald Reagan, 40th American President.

The first time I ever voted was for Ronald Reagan in 1980. I was a conservative because my parents were, but Ronald Reagan made me a legitimate conservative in my own right. Ronald Reagan was an imperfect candidate, but he had something that so few politicians have any more. He loved America and the American way of life with all his heart, and he made you love it, too.

In 2016, the Democrat front-runner for president, Bernie Sanders, is an out-of-the-closet Socialist who makes no bones about his political ideology. None at all. Unlike Barack Obama, who pretended to be Christian, American and patriotic, Bernie Sanders has no false front of any kind. You vote for him and he will fully recast America as a third-world Socialist nation. Everywhere he goes, he is greeted by screaming throngs of Obamaphone groupies who are salivating at the prospect of him being the next occupier of the Oval Office. I watch this happening on the news and ask myself “what happened to my America?” It’s gone.

The times where our freedoms would be taken away have arrived. These are the days Ronald Reagan warned us would come if we did not remain vigilant. We haven’t been, and they are here.

I was talking with my good friend and brother in the Lord Dave Gervins today, and we spent nearly an hour on the phone discussing end times things. We both came to the same conclusion that there is a spirit that has settled down on America, an evil spirit, and it has blinded the eyes and minds of our citizens. As a nation, we are watching the transition to a completely pagan, Godless society with no values, no morals, no Bible, no Ten Commandments, and no Jesus Christ anywhere to be seen.

America uses taxpayer dollars to fund the murder of millions of it’s most helpless citizens every year. The Center for Medical Progress comes along with a series of videos exposing the atrocities of Planned Parenthood, and the government wants to investigate them, and not Planned Parenthood. 12 citizens were slaughtered just last week for being Christians, and our president uses it for stump speech on gun control, uttering not a single word about them being targeted for death because of their faith. But on February 13, 2015, talking about 3 Muslims who were killed, Obama had this to say:

“No one in the United States of America should ever be targeted because of who they are, what they look like, or how they worship,” spoken by Barack Obama in defense of Muslims.” source

Right now, America’s leaders are sitting listlessly on the sidelines, watching Russia dominate the narrative in the Middle East. While Putin takes charge, America sits in the corner like a pusillanimous, effeminate cipher with no mission, no direction, no leadership and no hope. And the American people just sit back and watch it all unravel, no protests in the streets, no marches on Washington, nothing. The New World Order powers that actually control this nation know that their time has arrived. They know that they can act with impunity and there will be no reprisals.

Because of that, the persecution of Christians in this country are well underway. Kim Davis was thrown in jail for refusing to issue gay marriage licences, Christian bakers Aaron and Melissa Klein were fined $135,000.00 for refusing to make a queer “wedding” cake, a US Marine court-martialed for having a Bible verse on her computer, and Barronelle Stutzman was driven from her flower shop business for refusing to do flower arrangement for a same-sex “wedding”. I could give you 50 more examples right now of people, American citizens, who are being persecuted because they are Christians and nothing else.

Right now, while you read this, American citizen and Christian pastor Saeed Abedini and 3 others are rotting in an Iranian prison because no one in Washington cares one bit about their freedom. Their release was never part of any of the negotiations of Obama’s Iranian Nuclear Deal, and it’s highly likely that Saeed will be executed for his faith. But ask Obama to spend $5 billion dollars and release 5 Taliban terrorists in Gitmo to welcome US Army traitor and deserter Bowie Bergdahl to the White House? Sure! Happy to do it. That’s a deal he can get behind.

Our national nightmare is not that anti-American Marxists have taken over the White House. No, our national nightmare is that anti-American Marxists have taken over and we, the American people, lack the collective resolve to throw them out. We have forgotten what we stand for, we have forgotten our manifest destiny, we have forgotten our American exceptionalism, and we have fallen asleep at the wheel. Worst of all, we have abandoned God, and He has forgotten us. We have been left to the desires of our wicked hearts, and have been given the king that we deserve. Obama is our judgment and we refuse to repent. The handwriting is writ large on the wall of our nation.

“And this is the writing that was written, MENE, MENE, TEKEL, UPHARSIN.” Daniel 5:25 (KJV)

I will close with these words from our greatest president:

“Admittedly, there’s a risk in any course we follow other than this, but every lesson of history tells us that the greater risk lies in appeasement, and this is the specter our well-meaning liberal friends refuse to face—that their policy of accommodation is appeasement, and it gives no choice between peace and war, only between fight or surrender. If we continue to accommodate, continue to back and retreat, eventually we have to face the final demand—the ultimatum. And what then—when Nikita Khrushchev has told his people he knows what our answer will be? He has told them that we’re retreating under the pressure of the Cold War, and someday when the time comes to deliver the final ultimatum, our surrender will be voluntary, because by that time we will have been weakened from within spiritually, morally, and economically. He believes this because from our side he’s heard voices pleading for “peace at any price” or “better Red than dead,” or as one commentator put it, he’d rather “live on his knees than die on his feet.” And therein lies the road to war, because those voices don’t speak for the rest of us.

You and I know and do not believe that life is so dear and peace so sweet as to be purchased at the price of chains and slavery. If nothing in life is worth dying for, when did this begin—just in the face of this enemy? Or should Moses have told the children of Israel to live in slavery under the pharaohs? Should Christ have refused the cross? Should the patriots at Concord Bridge have thrown down their guns and refused to fire the shot heard ’round the world? The martyrs of history were not fools, and our honored dead who gave their lives to stop the advance of the Nazis didn’t die in vain. Where, then, is the road to peace? Well it’s a simple answer after all.

You and I have the courage to say to our enemies, “There is a price we will not pay.” “There is a point beyond which they must not advance.” And this—this is the meaning in the phrase of Barry Goldwater’s “peace through strength.” Winston Churchill said, “The destiny of man is not measured by material computations. When great forces are on the move in the world, we learn we’re spirits—not animals.” And he said, “There’s something going on in time and space, and beyond time and space, which, whether we like it or not, spells duty.”

You and I have a rendezvous with destiny.

We’ll preserve for our children this, the last best hope of man on earth, or we’ll sentence them to take the last step into a thousand years of darkness.“