Are The United States And Russia Actually Fighting Each Other In A Proxy War?

“It’s a proxy war by happenstance,” said Jeff White of the Washington Institute for Near East Policy, who counted at least 15 tanks and vehicles destroyed or disabled in... 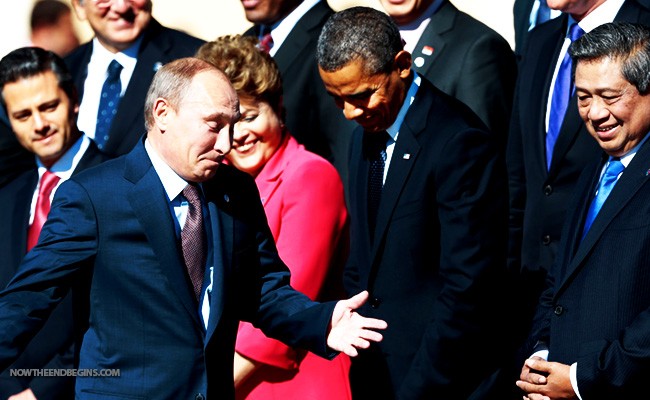 “It’s a covert effort and it’s technically deniable, but that’s what proxy wars are.”

“And ye shall hear of wars and rumours of wars: see that ye be not troubled: for all these things must come to pass, but the end is not yet.” Matthew 24:6 (KJV)

A very interesting dynamic is beginning to take shape as the current “fog of war” begins to lift a little. Over in Syria, for the past two weeks, Russia has been ostensibly fighting ISIS but in reality fighting the Syrian rebels opposed to the Assad regime. For the past two and a half years, the United States has been training and equipping the Syrian rebels. So using the rebels as proxy pawns, it would appear the the US and Russia are indeed fighting each other.

Putin smirks and shrugs while Obama bows, who is the real super power here?

Since Wednesday, when Syrian troops launched their first offensive backed by the might of Russia’s military, dozens of videos have been posted on YouTube showing rebels firing the U.S.-made missiles at Russian-made tanks and armored vehicles belonging to the Syrian army. Appearing as twirling balls of light, they zigzag across the Syrian countryside until they find and blast their target in a ball of flame.

“It’s a proxy war by happenstance,” said Jeff White of the Washington Institute for Near East Policy, who counted at least 15 tanks and vehicles destroyed or disabled in one day. “The rebels happen to have a lot of TOWs in their inventory. The regime happened to attack them with Russian support. I don’t see it as a proxy war by decision.”

Whether it will become one is one of the key questions confronting the Obama administration in the wake of President Vladimir Putin’s decision to throw Russia’s support behind Assad’s regime. It was no accident, say U.S. officials and military analysts, that the first targets of Russian airstrikes in Syria were the locations where the rebels armed with TOW missiles have made the most substantial gains and where they most directly threaten Assad’s hold over his family’s heartland in the coastal province of Latakia.

The supplies of the missiles, manufactured by Raytheon, are sourced mainly from stocks owned by the Saudi government, which purchased 13,795 of them in 2013, for expected delivery this year, according to Defense Department documents informing Congress of the sale. Because end-user agreements require that the buyer inform the United States of their ultimate destination, U.S. approval is implicit, said Shahbandar, a former Pentagon adviser.

But no decision is required from the Obama administration for the program to continue, Shahbandar said. “It doesn’t need an American green light. A yellow light is enough,” he said. “It’s a covert effort and it’s technically deniable, but that’s what proxy wars are.”