Kayla Mueller also praised Palestinians who attacked Israelis with rocks and said she marched “arm in arm” with them and supported their violence.... 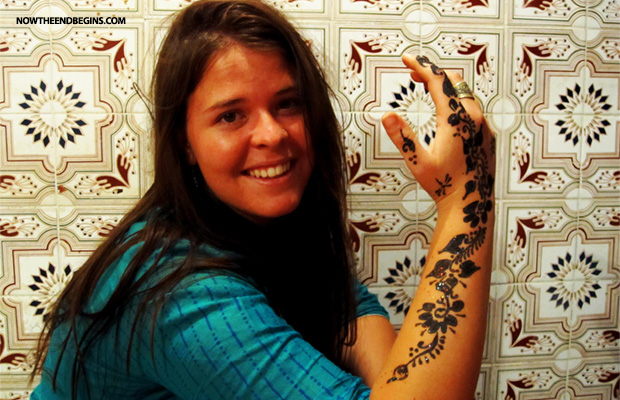 Sadly, Kayla Mueller supported the very terrorists who kidnapped her and held her hostage till the day she died in their charge

Many of you know that I am a Jewish Christian. I’ll never “not” be a Jew. Jesus made me a completed Jew. Having said that, when I read about the death of Kayla Mueller, at the hands of ISIS, it saddened me. The initial reports about her activity in the Middle East were deceptive. I was reading that Kayla went over there in a humanitarian capacity. Once again, the press reports what they’re told to report.

The TRUTH is that this woman was a Jew hater and an Israel hater to the core of her being. She went over there to help Hamas in their ongoing terrorist activities against Israel. She helped Palestinians to harass Israeli soldiers, and was used to block them from their job of keeping Islamic terrorists out of Israel. She aided Hamas in keeping the IDF from tearing down many houses where the terrorist thugs kept their arsenals.

Abdullah Abu Rahma, coordinator of the popular committee in the village of Bil’in where Kayla joined the protests, told ISM: “Kayla came to Palestine to stand in solidarity with us. She marched with us and faced the military that occupies our land side by side with us. For this, Kayla will always live in our hearts. We send all our support to her family and will continue, like Kayla, to work against injustice wherever it is.” . . .

With the ISM, Kayla worked with Palestinians . . . resisting the confiscation and demolitions of their homes and lands. In the Sheikh Jarrah neighborhood of Occupied East Jerusalem, she stayed with the Al Kurd family to try and prevent the takeover of their home by Israeli settlers.

Mueller also praised Palestinians who attacked Israelis with rocks and said she marched “arm in arm” with them and supported their violence. source – Debbie Schlussel

Kayla Mueller died at the hands of ISIS. The irony of this is astounding. Sometimes I think we forget the Scripture in Genesis where the Lord describes the descendants of Ishmael:

“And the angel of the Lord said unto her, Behold, thou art with child and shalt bear a son, and shalt call his name Ishmael; because the Lord hath heard thy affliction. And he will be a wild man; his hand will be against every man, and every man’s hand against him; and he shall dwell in the presence of all his brethren.” Genesis 16:11-12 (KJV)

For those who are not familiar with Scripture, God was describing Arabs.

So, to Kayla Mueller’s family, I do extend my condolences. It is sad when any member of a family dies. I don’t know if Kayla was taught anti-Semitism in her home. She may have been indoctrinated with it in college. Our colleges are being overrun with leftwing liberal Jew hating professors, and of course, the Muslim students on campuses, who by the way, are well funded by George Soros.

That will be a subject of a future article.

“Whoso diggeth a pit shall fall therein: and he that rolleth a stone, it will return upon him.” Proverbs 26:27 (KJV)