The dispute began with posters urging an end to U.S. military aid for Israel, prompting a City Council member to demand an end to the ads - and spawning... 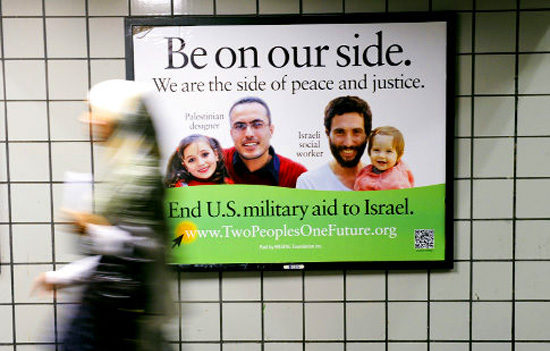 WESPAC Foundation's subway ad campaign is the first volley in a war of words playing out on billboards. A pro-Israel group plans a counter-campaign
by Geoffrey Grider September 16, 2011
NOW THE END BEGINS SHARE:

A subway station billboard war is the latest flareup in the Israeli-Palestinian conflict.

The dispute began with posters urging an end to U.S. military aid for Israel, prompting a City Council member to demand an end to the ads – and spawning an upcoming series of counter-ads.

WESPAC Foundation's subway ad campaign is the first volley in a war of words playing out on billboards. A pro-Israel group plans a counter-campaign

“This is a highly political campaign with a controversial underlying anti-Israel message,” Councilman Lewis Fidler (D-Brooklyn) wrote MTA President Thomas Prendergast. “I would urge you to disallow and/or remove these advertisements.”

The group behind the ads, the Westchester County-based WESPAC Foundation, said the subway spots are intended to encourage dialogue and not dissension. “If the councilman thinks they’e anti-Israeli, he should say why,” said Felice Gelman, a member of the group. “I have family in Israel. They deserve peace. And U.S. policies are not helping.”

Israel was slated to receive roughly $3 billion in military aid this year from the U.S. The ads – with the tagline “End U.S. military aid to Israel” – appeared in 18 stations beginning Sept. 5.

The pro-Israel group Stand With Us said it planned to counter the WESPAC campaign with a series of ads appearing in stations later this month. “We didn’t ask for a billboard war,” said the nonprofit group’s CEO, Roz Rothstein. “But the group putting them up wants a response, and we have to give them a response.”

The answering ad shows two small boys with their arms over each other’s shoulders. “The Palestinian Authority Must Accept The Jewish State & Teach Peace, Not Hate,” the copy reads. The Metropolitan Transportation Authority said it had no problem with the ads.

“There are First Amendment rights here, and the advertisement adheres to our guidelines,” said MTA spokesman Kevin Ortiz.

Straphangers in the Times Square subway station shrugged off the controversy.”I really have no reaction to it,” said Alex Zambrano, 34, of the East Village. “I know what’s going on in Palestine and Israel. But it’s just like every other ad that no one pays attention to.” source – NY Daily News