Another Obama First! US Gets DOWNGRADED To AA Credit Rating For First Time In History

Standard & Poor’s announced Friday night that it has downgraded the U.S. credit rating for the first time, dealing a symbolic blow to the world’s economic superpower in what... 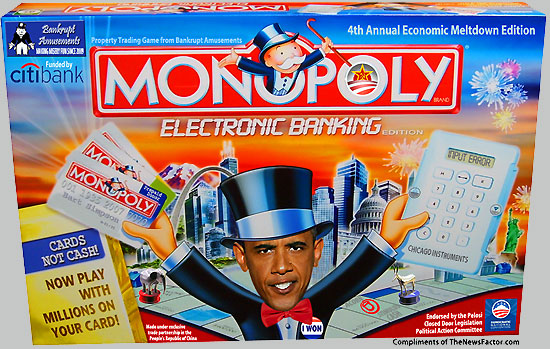 The America You Used To Know Is Gone...Get Used To That Idea
by Geoffrey Grider August 6, 2011
NOW THE END BEGINS SHARE:

Standard & Poor’s announced Friday night that it has downgraded the U.S. credit rating for the first time, dealing a symbolic blow to the world’s economic superpower in what was a sharply worded critique of the American political system.

The America You Used To Know Is Gone...Get Used To That Idea

Lowering the nation’s rating to one notch below AAA, the credit rating company said “political brinkmanship” in the debate over the debt had made the U.S. government’s ability to manage its finances “less stable, less effective and less predictable.” It said the bipartisan agreement reached this week to find at least $2.1 trillion in budget savings “fell short” of what was necessary to tame the nation’s debt over time and predicted that leaders would not be likely to achieve more savings in the future.

The decision came after a day of furious back-and-forth debate between the Obama administration and S&P. Treasury Department officials fought back hard, arguing that the firm’s political analysis was flawed and that it had made a numerical error in a draft of its downgrade report that overstated the deficit over 10 years by $2 trillion. Officials had reviewed the draft earlier in the day.

“A judgment flawed by a $2 trillion error speaks for itself,” a Treasury spokesman said Friday night.

The downgrade to AA+ will push the global financial markets into uncharted territory after a volatile week fueled by concerns over a worsening debt crisis in Europe and a faltering economy in the United States.

The AAA rating has made the U.S. Treasury bond one of the world’s safest investments — and has helped the nation borrow at extraordinarily cheap rates to finance its government operations, including two wars and an expensive social safety net for retirees.

Treasury bonds have also been a stalwart of stability amid the economic upheaval of the past few years. The nation has had a AAA rating for 70 years.

Analysts say that, over time, the downgrade could push up borrowing costs for the U.S. government, costing taxpayers tens of billions of dollars a year. It could also drive up interest rates for consumers and companies seeking mortgages, credit cards and business loans.

A downgrade could also have a cascading series of effects on states and localities, including nearly all of those in the Washington metro area. These governments could lose their AAA credit ratings as well, potentially raising the cost of borrowing for schools, roads and parks. source – Washington Post