Faced with a shortage of U.S. Navy ships, the Marine Corps is exploring a plan to deploy its forces aboard foreign vessels to ensure they can respond quickly to... 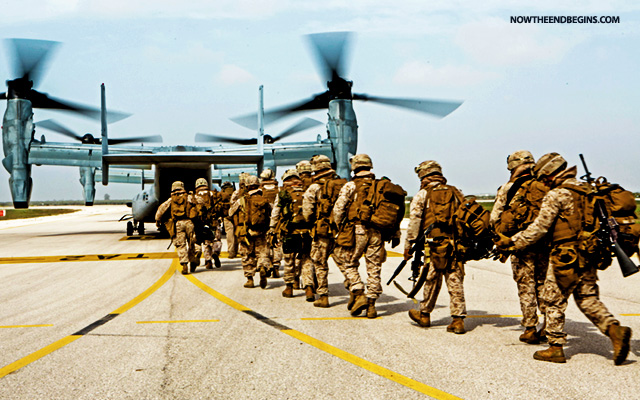 Faced with a shortage of U.S. Navy ships, the Marine Corps is exploring a plan to deploy its forces aboard foreign vessels to ensure they can respond quickly to global crises around Europe and western Africa.

EDITOR’S NOTE: For the past 6 and a half years, President Obama has chipped and stripped away at the once-mighty US military until he has reduced it to it’s present condition. Obama has not only purged the military of dozens of top-ranking admirals and generals patriots, he has also slashed funding to further hamper the responsive ability of our troops. And now, for the first time in American history, American Marines will be deployed on foreign vessels, because Obama stripped funding from the Navy.

“There’s no substitute for U.S. amphibious” vessels, Cooling said. “We’re looking at other options” in the meantime, he added. The Marines have been working with Spain, Italy, the United Kingdom and other close allies to determine the suitability of the foreign ships for U.S. personnel and aircraft.

The units would be designed for limited operations and not major amphibious assaults. A ground force of about 100 to 120 Marines would be deployed along with three or four Ospreys, which fly like airplanes but can take off and land like helicopters.

The U.S. Navy has 30 amphibious ships but says it needs 38 to fulfill war fighting requirements. It won’t reach that level until 2028 because of budget constraints, according to the Navy.

Cooling said it would likely be more than a year before agreements would be in place to allow for regular deployments of contingents of Marines on the foreign ships.

In additional to technical requirements, such as testing the ability of ships to carry U.S. aircraft and equipment, the United States would have to reach agreements separately with individuals or operate under NATO authorities. source