Amp Up The Crazy, Free-Bleeding Feminists Now Want Their 15 Minutes

Even among feminists, free-bleeding is a reasonably controversial thing. To social justice warriors (SJWs) like Kiran, it’s an important step towards smashing the patriarchy-imposed norm of “period shaming”, which... 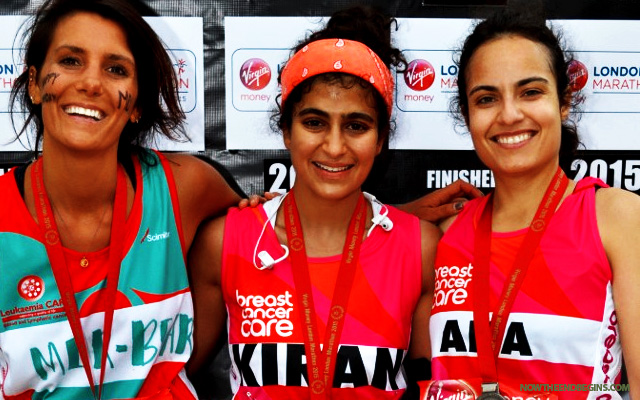 A four-month-old story about a woman running the London Marathon while on her period is suddenly, and inexplicably, making headline news in the United Kingdom.

“Because that, when they knew God, they glorified him not as God, neither were thankful; but became vain in their imaginations, and their foolish heart was darkened.” Romans 1:21 (KJV)

EDITOR’S NOTE: That we live in a lost and fallen world when we compare our society to the Bible is evident, but we are becoming increasingly more crazy as well. If you start with free-bleeding, would that not logically lead to free-peeing and free-pooping as well? But perhaps, after generations of public school teaching that man evolved from animals, this type of behaviour is the logical conclusion.

Kiran Gandhi ran the London Marathon way back in April while on the first day of her period and decided, rather than use misogynist sanitary products, that she would ‘free-bleed’ for her 26-mile endurance run. Blogging about her experience (with plenty of photographs of the slowly spreading dark patch around her jazzy leggings), she complained about the remarks and glances she got from other runners, and the piece was basically ignored. So far, so third-wave feminism.

“By using pads and tampons, we are paying the patriarchy to oppress us”

Yet over the weekend, the Daily Telegraph, The Independent,The Mirror, The Metro, and the Huffington Post, all found column inches to reheat the story and give her a slap on the back well done for a battle well fought. But why?

Even among feminists, free-bleeding is a reasonably controversial thing. To social justice warriors (SJWs) like Kiran, it’s an important step towards smashing the patriarchy-imposed norm of “period shaming”, which “effectively prevent the ability [of women to] bond over an experience that 50% of us in the human population share monthly”. To others, it isn’t even a real feminist battle, but a prank played on overly-serious feminists by on-line troublemakers deriving entertainment from watching the left eat itself.

Although the concept of free-bleeding has existed in the outer corners of the feminist-sphere for years, it came to real public prominence in 2014 when the 4chan messageboard [quite often very NSFW] hatched a plan to launch a false-flag operation to troll feminists by getting them on-board made-up crusades to humiliate themselves. An archived post from 2014 in a discussion about creating a fake feminist movement explains how the idea should be presented to left-wing media for consumption:

“What is free-bleeding? Free-bleeding is a new radfem movement that is quickly taking over twitter. It consists of us womyn bleeding with no restriction. A collective wave of free-bleeding would have significant power in social media, it would illustrate the collective force and passion us women possess.”

“Why should every woman free-bleed?

1. We are forced by the patriarchy to feel embarrassed and conceal our needs during menstruation
2. By using pads and tampons, we are paying the patriarchy to oppress us. It has been too long that us women have been paying the misogynist pigs for our physiological needs
3. It is natural, we must show those pigmen that we can do whatever we want
4. Finally, being able to menstruate is something that is a undeniably female characteristic. How DARE they try and oppress it

A number of women’s-interests websites quickly cottoned to the plot and published informative articles like ‘Free Bleeding is NOT a Thing‘, and ‘4chan is Trying to Make ‘Free Bleeding’ the Latest Twitter Trend‘. The Daily Dot claimed at the time the joke was going “terribly” because the pranksters had “no understanding of the movement they’re criticizing”, yet the idea seems to have stuck, and permeated radical feminist culture to the point that they have no idea they are being pranked at all. source