the Pope will continue to live with his trusted secretary Archbishop Georg Ganswein, who will also be head of the new Pope's household... 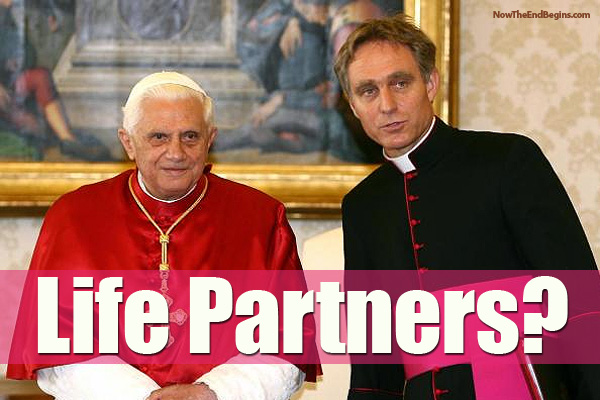 Are they partners for life...or Life Partners?
by Geoffrey Grider February 28, 2013
NOW THE END BEGINS SHARE:

Pope Benedict XVI will officially retire at 8 p.m. tomorrow, but his retirement package is raising a few eyebrows — and resurrecting rumors about his sexuality. Rather than decamp to some monastery in Germany as many expected, Benedict will instead stay living in the Vatican.

Are they partners for life…or Life Partners?

CNN reports he will be living in the Mater Ecclesiae (Mother of the Church) building, which formerly housed a cloistered convent in the Vatican gardens. He will be referred to as the “emeritus pope” and keep wearing the white — though he will lose his trademark red shoes, perhaps wearing a pair of “handcrafted brown loafers” instead, the WSJ reports.

One detail that has caused particular scrutiny is that the Pope will continue to live with his trusted secretary Archbishop Georg Ganswein, who will also be head of the new Pope’s household — from the sounds of it, working two jobs.

The Vatican denies that Ganswein working for both the old Pope and the new Pope will cause any conflict of interest. But there’s a more scandalous question as well, as put forward by Andrew Sullivan, perhaps the best-known Catholic blogger in America, today:

So Benedict’s handsome male companion will continue to live with him, while working for the other Pope during the day. Are we supposed to think that’s, well, a normal arrangement?

Sulivan, a gay man himself, has raised the question of the Pope’s sexuality before (he doesn’t suggest that the Pope has acted upon his sexual urges, we should note).

In 2010 he wrote that “it seems pretty obvious to me … that the current Pope is a gay man,” and went on to describe his reasoning:

When you look at the Pope’s mental architecture (I’ve read a great deal of his writing over the last two decades) you do see that strong internal repression does make sense of his life and beliefs. At times, it seems to me, his gayness is almost wince-inducing. The prissy fastidiousness, the effeminate voice, the fixation on liturgy and ritual, and the over-the-top clothing accessories are one thing. But what resonates with me the most is a theology that seems crafted from solitary introspection into a perfect, abstract unity of belief. It is so perfect it reflects a life of withdrawal from the world of human relationship, rather than an interaction with it. Of course, this kind of work is not inherently homosexual; but I have known so many repressed gay men who can only live without severe pain in the world if they create a perfect abstraction of what it is, and what their role is in it.

Sullivan isn’t exactly alone in his suspicions. He points towards a book by Angelo Quattrocchi (playfully titled “The Pope is Not Gay”) that he felt reached similar conclusions. In addition,former Benedictine monk-priest and author Richard Sipe claims to have spoken to a number of Roman clerics and members of the Roman press corps who were “convinced” that Benedict XVI was gay.

Of course, it doesn’t help the rumors that Ganswein has become something of a star in his own right. He’s been dubbed the “The George Clooney of the Vatican,” and appeared on the cover of the Italian Vanity Fair under the headline “It’s no sin to be good looking.” Donatella Versace has even dedicated a menswear collection to him. source – Yahoo