It happened in an American city: Hundreds of angry Muslim children and adults rioted against Christians, throwing chunks of concrete and eggs at their heads, spraying them with urine... 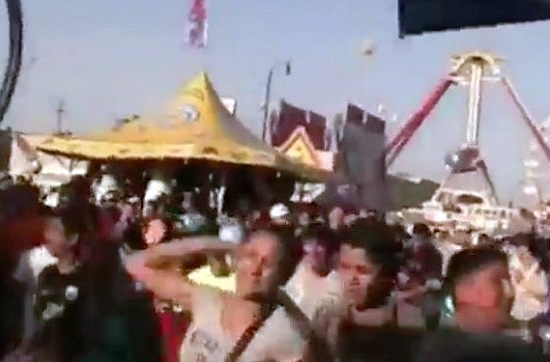 Christians holding signs were viciously assaulted by an angry mob of Arabs – as the crowd chanted “Allahu Akbar!” – Arabic for “God is the greatest!”
by Geoffrey Grider June 29, 2012
NOW THE END BEGINS SHARE:

Dearborn has become the Tahrir Square of the West

EDITOR’S NOTE: Dearborn Michigan has become almost completely Islamicized, and bears little to no resemblance to an American city any more. Dearborn was one of the major cities targeted by Obama and his 2008 campaign, and in accordance with the Sharia he was raised under, Obama has well seen to it’s destruction. Further, we at NTEB do not feel that the actions of the police in this video are typical of American law enforcement in non-Islamic American cities. The Dearborn Deputy Police Chief Mike Jaafar is himself a Muslim and this may very well account for the actions of his squad regarding their unwillingness to properly police the crowds and protect the street preachers. But we present this video not as a criticism of law enforcement, but to show you the very real and present threat that Islamic Americans pose to anyone who dares to speak out against Islam.

It happened in an American city: Hundreds of angry Muslim children and adults rioted against Christians, throwing chunks of concrete and eggs at their heads, spraying them with urine and cursing at them – while police stood by and threatened the Christian victims with “disorderly conduct.”

Christians holding signs were viciously assaulted by an angry mob of Arabs – as the crowd chanted “Allahu Akbar!” – Arabic for “God is the greatest!”

The city of Dearborn, Mich., hosted its annual 2012 Arab International festival on Father’s Day weekend. As can be seen in a video of the attack, a group of Christians holding signs were viciously assaulted by an angry mob of Arabs – as the crowd chanted “Allahu Akbar!” – Arabic for “God is the greatest!”

Starting at the 9:00 mark and continuing to about the 10:30 mark, the crowd – reminiscent of a rock-throwing “intifada” scene from the Middle East – can be seen hurling a dizzying barrage of objects at the Christians standing passively with their signs, causing some injuries.

WARNING: This video contains disturbing and GRAPHIC content. It is NOT SUITABLE for children of any age. The stoning starts around minute 9:00, but there is plenty of action before that.

At the beginning of the video, Christian street preachers shout, “God is good, and God is not Allah!”

First, police approached Ruben Israel of OfficialStreetPreachers.com, warning him, “The city of Dearborn has an ordinance, OK, that you guys can’t use the megaphone. So, if you guys continue to use that, you will get a citation.”

Israel noted that the group was allowed to use the megaphone in 2011. Then he asked the officer, “So, if we don’t use a megaphone, can we throw water bottles at the crowd?” The officer shook his head no.

“So what are you going to do if they throw water bottles at us?” Israel asked. “If that happens, we will take care of that and address it,” the officer promised.

When Israel said he had captured the mob’s assault on the Christians on video, the officer suggested he “take it through the proper channels, and we’ll try to find them.”

One boy yells, “Let’s beat the sh-t out of them!” A girl shouts, “Go home! Do you understand English?!” The Christians are no longer using megaphones, as the mob advances on them from all angles – hurling bottles, cans, eggs, chunks of concrete and even milk crates toward their heads.

Even young children shout obscenities such as, “F—k you, b-tch!” Meanwhile, police are nowhere to be seen in the video.

One of the Christians asks another, “Is this worse than last year?”

He replies, “Oh my goodness, yeah!! This is insanity.”

At the 6:55 mark, an irate 18-year-old man from Iraq gets into the Christians’ faces, screaming, “If you don’t like Dearborn, then go the f—k back home! … I am an American citizen, and I have my rights. There’s freedom of religion, isn’t there?”

He screams, “So why do you guys pray like this on the bank? Oh Lord. Why don’t you get on the ground, like the prophets, huh? You’re Christian. That’s what it says in the Bible, you stupid sh-t!” Many minutes into the video and after much of the shouting takes place, Dearborn mounted police ride through the crowd. The video states that no arrests were made.

According to the tape, the mob began chucking more stones, bottles and debris as the Christians were injured and property damaged. “Dearborn Police finally arrive after 30 mins of assault,” a caption states.

Despite the attacks the Christians had endured, a man identified in the video as Deputy Chief Dennis Richardson of the Wayne County Sheriff’s Office tells them, “You’re a danger to the safety right now.”

Officers claim they don’t have the manpower to protect the Christians at the festival. “Your safety is in harm’s way. You need to protect everybody,” said Deputy Chief Mike Jaafar of the Wayne County Sheriff’s Office. “You do have the option to leave. I just want to make that clear.”

Deputy Chief Richardson tells Israel, “We have the responsibility of policing the entire festival, and obviously your conduct is such that it’s causing a disturbance and is a direct threat to the safety of everyone here. Someone could get hurt. You already have blood on your face. One of the festival people, one of my officers, anybody can get hurt. Now we’re going to escort you out.”

Israel explains that the mob throws things and becomes more aggressive when police leave the scene. “Part of the reason that they throw things on someone is because you tell them stuff that enrages them,” Richardson argues.

Israel tells Richardson that the Christians aren’t even saying anything to the crowd at this point.

“We’re not even preaching,” he said. “So it’s obviously the signs. Now the signs are going to be illegal? … My thing is, if we could have a couple of officers there, that would kind of keep ‘em at bay.” Richardson insists that the Christians leave, telling Israel, “You’re going to leave now. We’re escorting you that way.”

Israel resists, saying, “We can’t do that.”

Richardson asks Israel, “How many bottles or objects have you been hit with?”

He replies, “Uh, I lost count. It’s only because you guys weren’t around. We have video of that.”

Israel also tells him, “We did try to contact the sheriff. The problem is, he didn’t respond. We did try to contact the city attorney…. The reason this is going on now is because of what happened last year. What happened last year is you allowed it to escalate into this. And so, you guys just lost a lawsuit on free speech, and you want to do it again.”

Another Christian asks Richardson, “Why don’t you get us a bullpen that we asked for in the email?” “OK, that’s a free-speech zone,” he replied. “And the Chamber of Commerce decided that they did not want a free-speech zone.”

At that, he insisted once again that the Christians leave. Israel argues that the officers are jeopardizing free speech.

“Let me ask you this: If we don’t leave, are we going to get arrested?” he asked. “Probably, we will cite you all, yes,” Richardson tells him, adding, “You are a danger to public safety. You’re disorderly.

Israel replies, “I would assume 200 angry Muslim children throwing bottles would be more of a threat than a few guys with signs.” The Christians tell one another: “If they make us leave right now, they reward riotous behavior.”

A woman steps in to speak with the officers, and then they tell the Christians, “If you don’t leave, we are going to cite you for disorderly conduct. … Look at your people, here. This is crazy! Now let’s go.” After they leave, the Christians are pulled over in their van by at least 12 police officers. The video does not explain why. source – Legalize Jesus