American Embassies Around The World Under Attack Right Now

Demonstrators attacked the U.S. embassies in Yemen and Egypt on Thursday. Hundreds of Yemeni demonstrators broke through the main gate of the heavily fortified compound in eastern Sanaa, shouting... 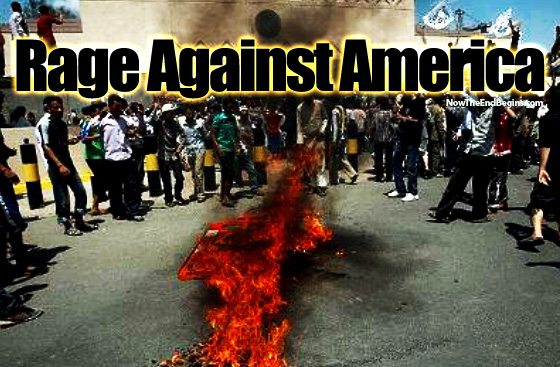 “For the day of the LORD is near upon all the heathen: as thou hast done, it shall be done unto thee: thy reward shall return upon thine own head.” Obadiah 1:15

President Barack Obama turned his back on Israel in their struggle to stop Iran from building a nuclear bomb. PM Netanyahu asked to meet with him and Obama said no. That was Monday. By Tuesday after noon the embassy in Egypt was under attack. By Wednesday morning 4 Americans including the US Ambassador Chris Stevens lay dead in the streets in Libya. Obadiah lays out a definite spiritual principal that when nations come against Israel they will be judged. What you are seeing right now playing out in the headlines is the beginning of God’s judgment on America.

From Reuters: Demonstrators attacked the U.S. embassies in Yemen and Egypt on Thursday in protest at a film they consider blasphemous to Islam and American warships headed to Libya after the death of the U.S. ambassador there in related violence earlier in the week.

Hundreds of Yemeni demonstrators broke through the main gate of the heavily fortified compound in eastern Sanaa, shouting “We sacrifice ourselves for you, Messenger of God”. Earlier they smashed windows of security offices outside the embassy and burned cars.

“We can see a fire inside the compound and security forces are firing in the air. The demonstrators are fleeing and then charging back,” one witness told Reuters. A security source said at least 15 people were wounded, some by bullets. An embassy spokesman said its personnel were reported to be safe.

In Egypt, protesters hurled stones at a police cordon around the U.S. embassy in central Cairo after climbing into the embassy and tearing down the American flag. The state news agency said 13 people were injured in violence which erupted on Wednesday night after protests on Tuesday.

Islamist gunmen staged a military-style assault on the U.S. consulate and a safe house refuge in Benghazi, eastern Libya on Tuesday. The U.S. ambassador Christopher Stevens and three other Americans died in the assault, carried out with guns, mortars and grenades. Eight Libyans were injured.

U.S. President Barack Obama vowed to “bring to justice” those responsible and the U.S. military moved two navy destroyers towards the Libyan coast, in what a U.S. official said was a move to give the administration flexibility for any future action against Libyan targets.

Obama said security was being increased at U.S. diplomatic posts around the globe and on Thursday the U.S. consulate in Berlin was partially evacuated after an employee fell ill on opening a suspicious envelope.

About 1,000 Bangladeshi Islamists tried to march on the U.S. embassy in Dhaka after protests earlier in the week outside U.S. missions in Tunisia, Sudan and Morocco. The U.S. military dispatched a Marine Corps anti-terrorist team to boost security in Libya, whose leader Muammar Gaddafi was ousted in a U.S.-backed uprising last year.

The attack, which U.S. officials said may have been planned in advance, came on the 11th anniversary of al Qaeda’s attacks on the United States on September 11, 2001. source – Reuters