Ahmadinejad Threatens That ‘Israel Will Soon Be Destroyed’

Iranian President Mahmoud Ahmadinejad told an annual anti-Israel protest in Tehran on Friday that the Jewish state was a "cancerous tumour" that will soon be excised, drawing Western rebukes.... 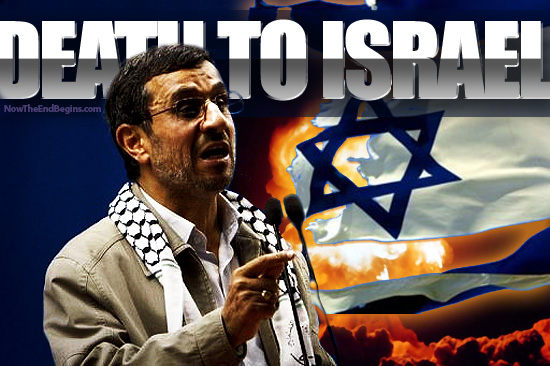 "If they make a mistake, our nation's reaction will lead to the end of the Zionist regime," he said.
by Geoffrey Grider August 18, 2012
NOW THE END BEGINS SHARE:

Iranian President Mahmoud Ahmadinejad told an annual anti-Israel protest in Tehran on Friday that the Jewish state was a “cancerous tumour” that will soon be excised, drawing Western rebukes.

“If they make a mistake, our nation’s reaction will lead to the end of the Zionist regime,” he said.

Washington said Ahmadinejad’s statements were “reprehensible”, while Paris viewed them as “outrageous.” Ahmadinejad’s diatribe against Israel in his Quds (Jerusalem) Day address was the latest in a long line to have drawn criticism from Western governments.

“The Zionist regime and the Zionists are a cancerous tumour,” he said.

“The nations of the region will soon finish off the usurper Zionists in the Palestinian land…. A new Middle East will definitely be formed. With the grace of God and help of the nations, in the new Middle East there will be no trace of the Americans and Zionists,” he said.

The diatribe took place amid heightened tensions between Israel and Iran over Tehran’s controversial nuclear programme. The Jewish state has in recent weeks intensified its threats to possibly bomb Iran’s nuclear facilities to prevent it having the capability to produce atomic weapons.

Iran, which is suffering under severe Western sanctions, denies its nuclear programme is anything but peaceful. Its military has warned it will destroy Israel if it attacks.

“They (the Israelis) know very well they don’t have the ability” to successfully attack Iran, foreign ministry spokesman Ramin Mehmanparast was quoted as saying by the ISNA news agency.

“If they make a mistake, our nation’s reaction will lead to the end of the Zionist regime,” he said.

State television showed crowds marching under blazing sunshine in Tehran and other Iranian cities to mark Quds Days, an annual commemoration launched by the founder of the Islamic republic, the late Ayatollah Ruhollah Khomeini, just after the 1979 revolution that brought him to power.

The head of Iran’s powerful Revolutionary Guards, General Mohammad Ali Jafari, told the Fars news agency as he attended the Tehran rally that “the Iranian nation has always been at the forefront of the (regional anti-Israeli) resistance in showing its animosity with Israel.”

He added that Iran intended to maintain that virulent stance.

Ahmadinejad, in his speech, claimed that “Zionists” triggered World Wars I and II, and had “taken control over world affairs since the moment they became dominant over the US government.”

“We strongly condemn the latest series of offensive and reprehensible comments by senior Iranian officials that are aimed at Israel,” Vietor said.

“The entire international community should condemn this hateful and divisive rhetoric.”

“We firmly condemn these outrageous and totally unacceptable statements and we remind (Iran) that we would never allow the right of Israel to live in peace to be called into question,” he said.

Ahmadinejad’s past broadsides against the Jewish state, and his denial that the Holocaust occurred, have earned him opprobrium from Western and other nations, and walkouts during his addresses to the UN General Assembly.

Israel has been employing its own invective against Iran and its leaders, invoking the image of Hitler and the Nazis on the eve of World War II and accusing Tehran of being bent on Israeli genocide. source – Yahoo News