ISIS militants posted a tweet warning 'Death to Putin: We are coming #soon' with a picture of Moscow's St Basil's Cathedral in flames, according to the SITE intelligence group.... 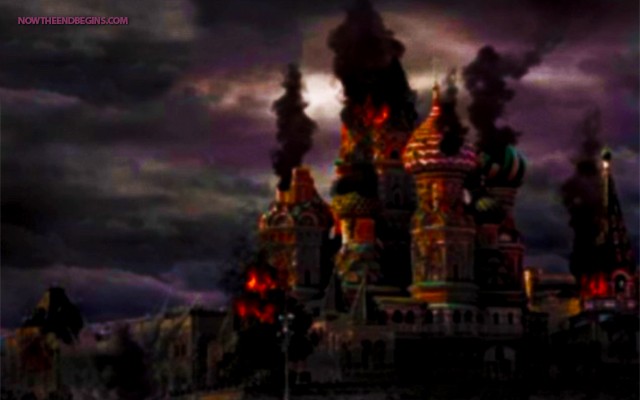 Russia’s defence ministry said it struck an ISIS training camp near the village of Maadan Jadid, 45 miles east of Raqqa city and ‘a camouflaged command post at Kasrat Faraj’ southwest of the city. It came as ISIS militants posted a tweet warning ‘Death to Putin: We are coming #soon’ with a picture of Moscow’s St Basil’s Cathedral in flames, according to the SITE intelligence group.

Meanwhile, Russian President Vladimir Putin arrived for talks with his French counterpart Francois Hollande in Paris as questions mount over who Moscow was targeting in Syria.  The two leaders smiled as they shook hands outside the Elysee palace where they will discuss the conflict in Syria before a four-way summit with Germany on the crisis in Ukraine.

Moscow’s St Basil’s Cathedral and all of Russia will be in flames said ISIS today. #soon.

He said their bodies were transported to a hospital in the province.

Moscow’s defence ministry said Friday claimed its war planes had ‘conducted 18 sorties on 12 positions held by the Islamic State terrorist group in Syria’ since Thursday, although some of these were disputed by civilians and the Syrian opposition.

The statement said Russian raids also destroyed ‘a command post and communications centre’ held by ISIS in Daret Ezza in northern Aleppo province, as well as bunkers and weapons depots in Maaret al-Numan and Habeet in northwest Idlib province.

Alexei Pushkov, the head of the foreign affairs committee of Russia’s lower house of parliament said more than 2,500 air strikes by the US-led coalition in Syria had failed to inflict significant damage on ISIS jihadists, but Russia’s campaign would be more intensive.

‘I think it’s the intensity that is important. The US-led coalition has pretended to bomb Daesh (another name for Islamic State) for a year, without results. ‘If you do it in a more efficient way, I think you’ll see results,’ he said.

Earlier, the SOHR claimed two children were the latest victims of Russia’s airstrikes in Syria that have so far killed up to 36 civilians. Reports of the deaths came as a U.S. general accused Moscow of using indiscriminate cluster bombs that can obliterate areas the size of football fields in its attacks on rebel groups.

The latest air strikes hit the district of Jabal al-Zawiya, in an area under the control of Al-Qaeda’s affiliate in Syria and other Islamist rebel groups, according to a British-based monitoring group.

‘Four civilians, including a child and a woman, were killed in raids conducted by Russian military aircraft,’ said the Syrian Observatory for Human Rights.

‘Three other civilians, including a girl and a woman, were killed in bombing by these planes of the village of Habeet,’ in the same province that borders Turkey, said the group, which relies on a network of sources on the ground for its information.

Russian air strikes on Syria have killed 28 people since they were launched on Wednesday, says the Observatory. source