ATTENTION BDS MOVEMENT: If You Absolutely Must Boycott Israel And Israeli Products, You Better Read This First

First, remove all Intel Pentium and Celeron computer processor chips from personal computers (desktops, laptops and notebooks) as these were either developed or manufactured in Israel

“But thou, O Daniel, shut up the words, and seal the book, even to the time of the end: many shall run to and fro, and knowledge shall be increased.” Daniel 12:4 (KJV)

Step 2. Any computers that still work need to have their anti-virus software and personal firewalls removed as this technology originated in Israel. The organisation’s firewall will also need to be switched off. Staff should no longer open external emails as most of these will be infected with viruses. No outgoing emails can be sent. The algorithm (code) that’s used today for sending e-mails, was made by an Israeli who worked at the Ben-Gurion University in Be’er-Sheva in 1980. 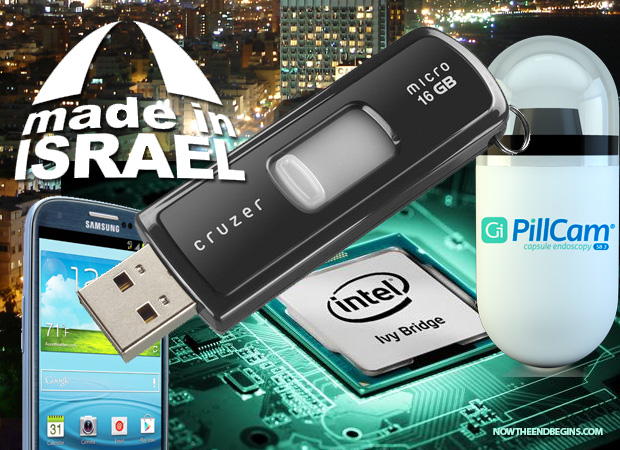 One of Israel’s sources of pride is the enormous number of inventions and innovations that have taken root on its soil over 63 years — despite challenges of geography, size and diplomacy. The ever-churning Israeli mind has brought us drip irrigation, the cherry tomato, the electric car grid, the Disk-on-Key and much more.

Step 4. Turn off your voice-mail service and delete any recorded messages. Israeli companies invented the voice-mail system. If someone you do not know answers your phone-call, then hang up. Israeli call-centres and call-centre technology is in widespread operation in the UK.

Step 5. Before accepting any printed material, check that the supplier has not used the Israeli device that might have saved up to 50% of the ink used.

Step 6. At home, do not use Facebook as many in-built and add-on applications are Israeli-developed. Do not watch videos on the Internet as the platform used to upload them may be from AOL and hence from an Israeli company. Do not use the Internet to search for answers to your questions as this may involve use of an Israeli-developed search engine. Better to remain unenlightened.

Step 7. On your TV or home entertainment centre, do not use Video On Demand (VOD) to watch movies as you may inadvertently see an advert displayed using Israeli software. Do not purchase any games devices as these are likely to use Israeli technology.

Step 8. Do not read books using an e-book as this may contain Israeli technology. Do not use data storage as it may have been developed at Israel’s storage technology R&D center.

Step 9. Do not buy an electric car as it is likely to be powered with an Israeli battery or use Israeli developed charging mats. Continue to sit in traffic knowing that you are polluting the environment and financing oil-rich despotic regimes.

Turning to food and drink, all food outlets on the organisation’s premises must dispose of cherry tomatoes, which were developed in Israel. Staff must ensure that no cherry tomatoes are included in sandwiches brought into office premises. The ban also applies to honey and any products derived from honey. Israel has developed solutions to the worldwide problem of bee-colony collapse, so that any products derived from bees might only be available now due to an Israeli invention.

Avoid drinking any of the world-recognised award-winning Israeli wines. Do not consume homemade drinks from Israeli-manufactured household drinks machines.

Avoid any fruit from South Africa or Peru as produce from these countries is being marketed with Israeli brand names.

No agricultural products from the following areas must be consumed as they use water irrigation and agricultural technology provided directly from Israel. This includes most of Africa, China, India, Indonesia (a Muslim country), Nepal and many others.

Much fruit and vegetables (including organic) imported into the UK has been enhanced using Israeli technology. This may save millions of people from starving around the world, but is not a good reason for you to eat it. To be safe, only eat fruit and vegetables that you have grown yourself using seeds that have been in your family for generations.

Destroy all personal medication. Israel’s Teva Pharmaceuticals, the largest generic drugs company in the world, will have manufactured many of your medicines.  Staff with the following illnesses will need to take specific precautions.

Cancer – do not take any form of medication or treatment. Israeli scientists have been working at the forefront of oncology for decades.

AIDS and HIV – beware; researchers at Israel’s Weizmann Institute or Hebrew University developed or improved AZT and Hypericin-based drugs; they have also developed a treatment that destroys HIV-infected cells without damaging healthy ones.

Diabetes – do not measure or inject Insulin using the devices developed by Israeli scientists.

Multiple Sclerosis – stop taking Copaxone, one of the most efficient medicines and the only non-interferon agent, as Teva developed it.  Don’t touch Laquinimod either.

Staff with a family history of heart disease and arteriosclerosis must not use the Israeli device for early detection of these.  Rather, wait until onset of the disease.

Epileptics – stop treatment that may have benefited from the Israeli discovery of the underlying mutant gene; also throw away the bracelet that sends out an alert when a person goes into seizure.

Myeloma – stop taking the drug Velcade, which was developed over a period of 30 years by scientists at Haifa.

Dyslexics must not benefit from the Israeli Internet-based reading system.

Skin allergies must be treated with steroid creams only, as the new safer non-steroid alternative is Israeli.

Any incident of stroke or head trauma or onset of Alzheimer’s, Parkinson’s, MS, epilepsy, glaucoma or brain tumor must avoid using any of the Weizmann Institute’s patented methods of treatment.

Before any surgery or medical tests, check that hospital catheters have not been protected from infection using the new plastic from Israel that disables microorganisms. Avoid throat surgery as this may utilize Israeli surgical lasers.

Ensure any colonoscopy or gastro investigation does not use internal Israeli cameras such as the Pillcam.  Never undergo surgery to install an artificial heart, as the first artificial heart transplant took place in Israel.

Kidney transplant patients must wait for donors of the same blood group as only Israel’s revolutionary new methods allow donors from other blood groups.  Staff of Arab origin must not make use of the only database for matching potential Arab donors of bone-marrow – in Israel.

In the event of a spinal injury or disease, do not accept spinal implants – likely to be an Israeli product or development. Heart rhythm problems must not be solved with the Israeli-developed heart pulse generator. All heart stents are off-limits as most of these originate from Israeli medical companies.

Check all vaccines as many of these have been developed in Israel.  Ensure that all X-rays do carry a radiation risk, as the only radiation-free system is Israeli.  Treatments derived from Stem Cell research must be avoided as most of these are Israeli-developed.

If you or your family are struck with a bacterial infection, do not take alternatives to older, ineffective bacteria-resistant antibiotics, as an Israeli discovery will have been responsible for the modern, effective drugs. Check that any pain relief medication is not based on soya as an Israeli doctor discovered the beneficial effect of the soya bean.

Do not use the revolutionary new Israeli bandage that saved the life of Arizona senator Gabriella Giffords after she was shot in the head.  If you break a bone badly, reject any treatment that involves introducing collagen, as this may have been manufactured from Israeli plants.

Do not protect babies and infants from Sudden Infant Death Syndrome with the Babysense system from Israel.

Do not use Epilady (or epilator) – two Israelis invented this hair removal device.

Finally, reject all major dental treatment, as your teeth may need to be scanned with an Israeli-developed dental scanner.

When interviewing prospective new staff or holding meetings with members of the public or with individuals from other companies, it is vital that you check whether they originate from, or are associated with the following countries and areas. You must ensure that you do not have any contact with people who have benefited from Israel’s aid to those countries. The organization must avoid any possible acknowledgment of Israel’s contribution to world relief.   In addition, you must obtain a formal statement from the government of these countries that Israeli aid was not responsible for the production or development of any goods and services supplied to the organization.

Ghana (has been receiving technological aid from Israel since 2006; Israel is now providing neonatal units to save many of the 4,800 babies that die each year – Mar 2011)

Chile, whose rescued miners were treated to a tour of Israel as part of their “Pilgrimage of Thanks” (Feb 2011)

Jerusalem In Breathtaking High Definition from Now The End Begins on Vimeo.

China (a major purchaser of Israeli technology, and recipient of medical aid and training)

Haiti (Israel set-up the largest field hospital to treat victims of the 2010 earthquake, the hurricane and the cholera outbreaks and provided vital assistance for over a year)

Sri Lanka (Israel conducted a massive airlift with food, 50 medical staff and rescue teams only 48 hours after the Tsunami in Dec 2004)

Peru’s hydro-electric power plants are also being built and run by an Israeli company.

Always remember that the boycott extends to any individuals from the above regions that have been exposed to Israeli assistance during the 63 years existence of the current Jewish State.