'I’m going to the UN in order to demand our legitimate rights and secure full membership,' Abbas said. The Palestinian Authority will be seeking full United Nations membership in... 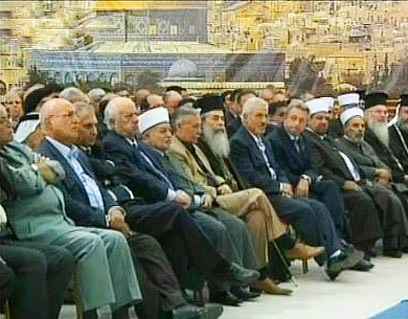 Palestinian leader says PA to proceed with UN bid in September because President Obama endorsed Palestinian state; ‘I’m going to the UN in order to demand our legitimate rights and secure full membership,’ he says.

We are the only legitimate representative of the Palestinian people and we intend to keep going until we secure full independence, he said.

“We are going to the Security Council,” Abbas added, but then made it clear that “all options are open” and that a final decision has not been made yet.

Abbas said the Palestinians will be aiming to “secure independence in the 1967 borders and its holy capital, Jerusalem.” He also urged his countrymen to avoid violence, saying “we must avoid force.”

Turning his attention to Israel, the Palestinian leader slammed the Jewish state for what he claimed was its failure to advance the peace process. He said that the refugee problem needs to be resolved, charging that the Israeli government only wants negotiations for the sake of negotiations.
Abbas added that the Palestinians are proceeding with their United Nations statehood bid in September because US President Barack Obama said previously he wanted to see a Palestinian state. source – YNet