In a fiery Ramallah speech, Palestinian president Abbas says 'Palestinian people won't kneel, and we tell the world, listen... without east Jerusalem as a capital of the state of... 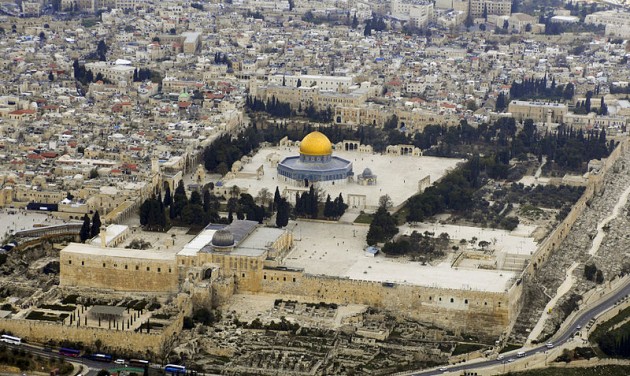 The bible is very specific that in the end of time, the world’s attention would not be focused just on Israel in general, but on Jerusalem in particular. It is the most fought for piece of property in human history. Palestinian president Abbas has no intention of letting it remain in Jewish control, and declared his hard line in a blistering speech today.

Too bad Abbas has never read the bible all the way through to the end. If he had, he would see that the Jews win in the end, and that the Messiah rules and reigns from David’s Throne in Jerusalem for 1,000 years of perfect peace.

In a fiery Ramallah speech, Palestinian president Abbas says ‘Palestinian people won’t kneel, and we tell the world, listen… without east Jerusalem as a capital of the state of Palestine, there will be no peace between us and Israel’

Palestinian President Mahmoud Abbas sent a defiant message to Israel’s leadership and US mediators Saturday, telling cheering supporters that the Palestinians “won’t kneel” and won’t drop demands for a capital in east Jerusalem.

Abbas’ unusually fiery speech highlighted the wide gaps between him and Prime Minister Benjamin Netanyahu on the outlines of a peace deal. It also raised new doubts about the chances of US Secretary of State John Kerry to bridge those gaps in coming weeks and come up with a framework for an agreement.

Abbas adopted tough positions in the wide-ranging speech, saying that “there will be no peace” without a Palestinian capital in east Jerusalem and that he would not recognize Israel as a Jewish state.

On Saturday, Abbas spoke to several hundred Palestinians activists from Jerusalem whom he had invited to his headquarters in the West Bank city of Ramallah.

The crowd whistled, chanted and clapped as the normally low-key Abbas, widely known as Abu Mazen, struck a tough tone.

“Without east Jerusalem as a capital of the state of Palestine, there will be no peace between us and Israel,” Abbas said.

Abbas also reiterated that he will not recognize Israel as the homeland of the Jewish people. Netanyahu has raised such a demand, and there is growing expectation that it will be included in Kerry’s proposal.