Vatican City - They called for a nation-wide exorcism of Mexico, carried out quietly last month in the cathedral of San Luis Potosí. High levels of violence, as well... 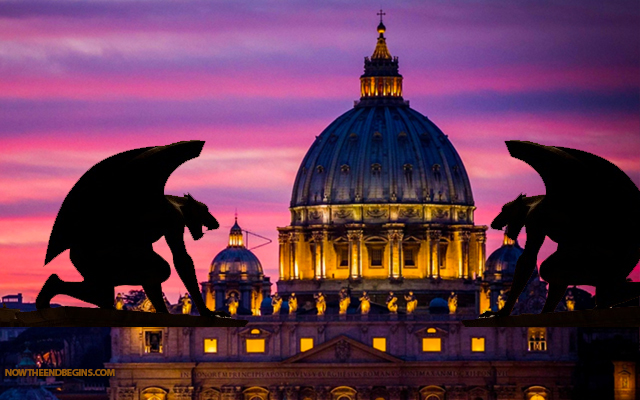 Can a country with deep Christian roots like Mexico find itself at the mercy of demons? Some in the Church fear so.

“Nevertheless I tell you the truth; It is expedient for you that I go away: for if I go not away, the Comforter will not come unto you; but if I depart, I will send him unto you.” John 16:7 (KJV)

EDITOR’S NOTE: Pope Francis’ frequent references to the Devil have helped propel belief in Beelzebub back into the mainstream of the Catholic Church. Dioceses in the UK, Italy, Spain and elsewhere have noticed a dramatic increase in the number of people claiming to be possessed and have responded by training more priests in the dark arts of how to perform exorcisms. In short, Demonology has become big business for the Vatican. But whatever happened to preaching the gospel of salvation in Jesus Christ? As Christians, we are to lift up and exalt the work of the Holy Spirit, and not focus on demons and the underworld.

Vatican City – They called for a nation-wide exorcism of Mexico, carried out quietly last month in the cathedral of San Luis Potosí. High levels of violence, as well as drug cartels and abortion in the country, were the motivation behind the special rite of exorcism, known as “Exorcismo Magno.”

Cardinal Juan Sandoval Íñiguez, the archbishop emeritus of Guadalajara, presided at the closed doors ceremony, the first ever nation-wide exorcism in the history of Mexico.

The event was not made known to the general public beforehand. According to Archbishop Cabrero, the reserved character of the May 20 ceremony was intended to avoid any misguided interpretations of the ritual.

But how can an entire country become infested by demons to the point that it’s necessary to resort to an Exorcismo Magno? “To the extent sin increases more and more in a country, to that extent it becomes easier for the demons to tempt (people),” Fr. Fortea told CNA.

The Spanish exorcist warned that “to the extent there is more witchcraft and Satanism going on in a country, to that extent there will be more extraordinary manifestations of those powers of darkness.”

Fr. Fortea said that “the exorcism performed in San Luís Potosí is the first ever carried out in Mexico in which the exorcists came from different parts of the country and gathered together to exorcise the powers of darkness, not from a person, but from the whole country.”

“This rite of exorcism, beautiful and liturgical, had never before taken place in any part of the world.  Although it had taken place in a private manner as when Saint Francis (exorcised) the Italian city of Arezzo,” he stated. source