Obama shifted responsibility for the Benghazi attack to Congress, and said 'I offer no apologies' ... 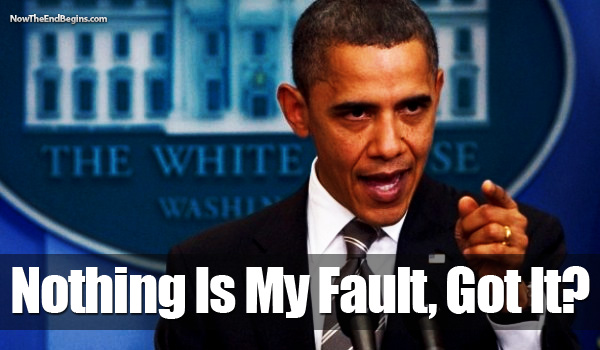 Another day, another scandal.
by Geoffrey Grider May 17, 2013
NOW THE END BEGINS SHARE:

You’re a racist if you disagree

President Barack Obama dodged questions Thursday about the IRS’s targeting of conservative groups, shifted responsibility for the Benghazi attack to Congress, and said ‘I offer no apologies’ for the Department of Justice’s secret seizure of reporter’s phone records in search of a classified intelligence leak.

In a rain-soaked Rose Garden press conference originally intended to be a victory lap for the United States’ relationship with Turkey, Obama stood alongside Turkish Prime Minister Recep Erdogan and fielded questions which quickly shifted to the trio of scandals that are engulfing his administration.

Beginning in 2010, Obama’s IRS targeted a list of approximately 300 tea party-related and other conservative groups for aggressive scrutiny following their applications for tax-exempt status.

His Department of Justice secretly spied on the Associated Press’s phone records in an attempt to trace a national security leak.

And his State Department political appointees intervened in the aftermath of the 2012 terror attack on an American diplomatic outpost in Libya, in a process that resulted in a misleading set of talking points which ignored terrorism in favor of a more muted explanation, in the midst of a re-election campaign.

On the IRS scandal, Obama wouldn’t commit to saying no one at the White House knew about the targeting of conservative groups before the White House Counsel was informed just days ago.

He spoke of various measures he was recommending, to ‘learn the lessons of Benghazi.’ But he referred to the murders of four Americans there as an ‘incident,’ not a terror attack. source – Daily Mail UK