A 3D Printer That Looks More Like Magic Than Technology

Regular 3D printers are just 2D printers on repeat, according to Californian chemist Jason Rolland. So his company, Carbon3D, created a machine that works up to 100 times faster... 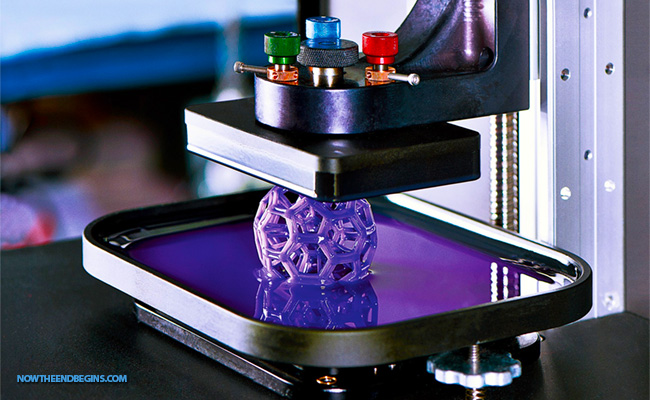 This ultraviolet printer is 100x faster than ordinary 3D printers

“But thou, O Daniel, shut up the words, and seal the book, even to the time of the end: many shall run to and fro, and knowledge shall be increased.” Daniel 12:3 (KJV)

EDITOR’S NOTE: We live in an amazing age, a time of relentless, changing technology that is evermore sophisticated and complex today than just a few years ago. The prophet Daniel said this time would come and it is indeed here. When the Antichrist comes after the Rapture, he will deceive by signs, miracles and wonders, and a world that expects the unexpected will eagerly lap it up. We as Christians need to stay rooted and grounded in the word of God in these last days of human history, and put our trust in what the Bible says and not the things we can see.

Regular 3D printers are just 2D printers on repeat, according to Californian chemist Jason Rolland. So his company, Carbon3D, created a machine that works up to 100 times faster than standard machines by “growing” objects out of a pool of resin.

Traditional 3D printers are too slow, Rolland says: they work by sandwiching individual layers on top of one another at a pace of just a few millimetres per hour. “Carbon3D takes your speed down from hours to minutes,” says Rolland, the startup’s vice president of materials. Carbon3D has developed a resin that can withstand high temperatures. “This gets us into industries like aerospace and automotive applications,” he adds.

The company has patented its own method, continuous liquid interface production (CLIP), which relies on a balance of oxygen and UV light to liquefy and solidify materials at precise points in the printing process. UV light rapidly solidifies resin, and oxygen counteracts the effect, ensuring that a thin liquid layer remains in the tray. To make the object, a small overhead platform dips into this permanently liquid source: as it pulls the resin out of the pool, the UV light solidifies it.

Carbon3D has tailored this process so that it can be used to create a range of materials, from rigid plastics to silicone rubbers. Its prototypes are currently being tested at Ford, as well as sportswear and visual-effects companies. Carbon3D believes it will be able to print objects up to 1,000 times faster than regular machines. “It fulfills the original promise of 3D printing,” Rolland says. And makes it look cool.

1 The Carbon3D’s build platform lifts continuously as an object is printed.
2 UV-curable resin sits in a reservoir.
3 UV light is beamed through an oxygen-permeable window.
4 A “dead zone” of uncured resin means you can print an item without stopping.
5 The UV light projects the object in cross sections, slice by slice, from below.