Over 90% Of America Is Frozen Solid In Polar Vortex

Brutal, life-threatening cold descended over the East and the South, sending the mercury plummeting on Tuesday into the single digits and teens from New York and Washington to Atlanta,... 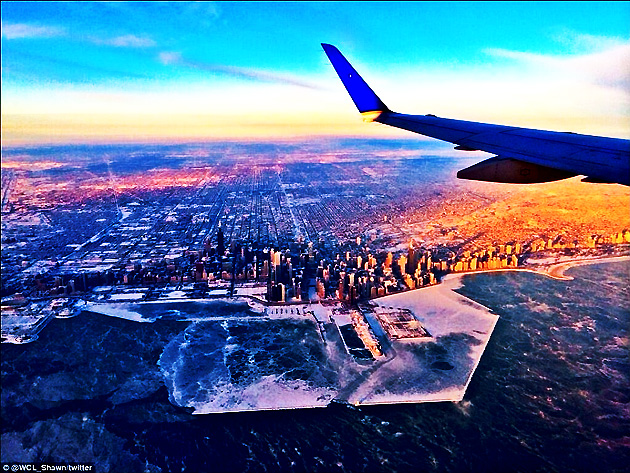 A view from a plane window shows Chicago encased in ice. More than 3,700 flights were canceled today
by Geoffrey Grider January 7, 2014
NOW THE END BEGINS SHARE:

Few people have been as vocal about the urgency of global warming and the need to reinvent the way the world produces and consumes energy. And few have put as much money behind their advocacy as Mr. Gore and are as well positioned to profit from this green transformation, if and when it comes. Former Vice President Al Gore thought he had spotted a winner last year when a small California firm sought financing for an energy-saving technology from the venture capital firm where Mr. Gore is a partner.

Mr. Gore and his partners decided to back the company, and in gratitude Silver Spring retained him and John Doerr, another Kleiner Perkins partner, as unpaid corporate advisers.

The deal appeared to pay off in a big way, when the Energy Department announced $3.4 billion in smart grid grants. Of the total, more than $560 million went to utilities with which Silver Spring has contracts. Kleiner Perkins and its partners, including Mr. Gore, could recoup their investment many times over in coming years. source – News Busters

Daily Mail UK: Brutal, life-threatening cold descended over the East and the South, sending the mercury plummeting on Tuesday into the single digits and teens from New York and Washington to Atlanta, Nashville and Birmingham – where many people have little experience in dealing with freezing weather.

A view from a plane window shows Chicago encased in ice. More than 3,700 flights were canceled today

After pounding the Midwest and Great Lakes over the weekend, snow from winter storm Ion started to move into the East on Tuesday. The morning weather map for the eastern half of the U.S. was dotted with lots of small, negative numbers with the Midwest and the East were colder than much of Antarctica.

The historic freeze shuttered schools, businesses and made road conditions treacherous. More than 3,700 flights – around one out of every 10 domestic departures – were canceled on Monday with delays continuing today. The majority of cancellations were in Chicago, Cleveland, New York and Boston. 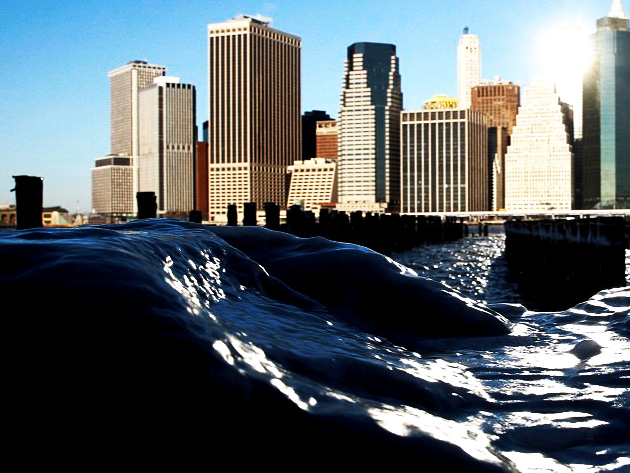 A sign on a bank near the bus stop flashed 19 degrees at around 8am. Patches of ice sparkled in parking lots where puddles froze overnight.

In the East, a blizzard smothered western New York with up to 18 inches of snow and wind gusts of up to 50 mph. As much as 3 feet of snow could fall there by the time the storm eases on Wednesday.

In New York City, Central Park was 5F on Tuesday, the coldest January 7 since 1896, according to NBC New York.  Airports LaGuardia, Newark and JFK were also hit with record lows. Newark airport fell to 4 degrees, according to the National Weather Service.

Temperatures in parts of West Virginia hit lows not seen for 25 years, while the extreme cold in Virginia broke records that had stood since the late 1950s.  The National Weather Service said the mercury bottomed out at 3 degrees before sunrise at Baltimore-Washington Thurgood Marshal International Airport, with a wind chill of minus 16.

Forecasters said some 187 million people in all could feel the effects of the ‘polar vortex’ by the time it spread across the country. 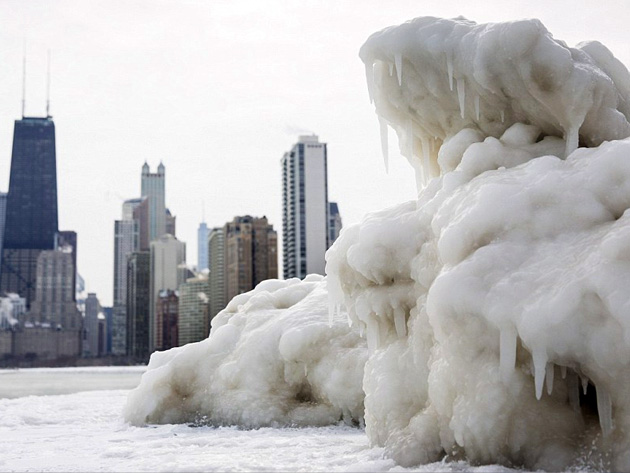 PJM Interconnection, which operates the power grid supplying energy to more than 61 million people in the Mid-Atlantic, Midwest and South, asked users to conserve electricity because of the cold, especially in the morning and late afternoon.

Meanwhile, recovery was the focus in several Midwestern states. The subzero cold followed inches of snow and high winds that made traveling treacherous and was blamed for numerous deaths in Michigan, Illinois, Indiana and Ohio.

On Monday, the temperatures reached such extreme lows across the Midwest that Lincoln Park Zoo in Chicago was forced to keep their polar bear Anana indoors in a ‘climate-controlled’ area.

A zoo spokesman explained polar bears in the Arctic would normally develop a fat blubber layer to deal with sub-zero temperatures but that Anana hasn’t done so in the generally warmer environment of the windy city.

At least 15,000 customers in Indiana were without power early on Tuesday. Utility crews worked to restore service as temperatures plunged into the negative teens, but officials warned that some customers could be in the cold and dark for days.

More than 500 Amtrak passengers spent the night on three trains headed for Chicago that were stranded because of blowing and drifting snow in Illinois. Spokesman Marc Magliari said all the passengers, traveling from Los Angeles, San Francisco and Quincy, Ill., would reach Chicago by train or bus later Tuesday.

Warmer weather – at least, near or above freezing – is in the forecast for much of the eastern half of the U.S. Indianapolis should reach 27 degrees on Wednesday, and other cities in the Midwest and in the East could climb above freezing later in the week.

By Wednesday, subzero high temperatures will be virtually gone from the Lower 48 States. On Thursday, highs in the 20s or 30s in much of the Great Lakes and Northeast will seem downright balmy compared to earlier in the week.

The deep freeze is to blame for at least 13 deaths so far – almost all of them from traffic accidents. A man in Wisconsin died of hypothermia, while an elderly woman with Alzheimer’s was found dead in the snow about 100 yards away from her home in New York state after wandering out.

Monday’s subzero temperatures broke records in Chicago, which set a record for the date at minus 16, and Fort Wayne, Indiana, where the mercury fell to 13 below.

Records also fell in Oklahoma and Texas, and wind chills across the region were 40 below and colder. Officials in states like Indiana already struggling with high winds and more than a foot of snow urged residents to stay home if they could.

‘The cold is the real killer here,’ Indianapolis Mayor Greg Ballard said on Monday as he asked schools and businesses to remain closed another day. ‘In 10 minutes you could be dead without the proper clothes.’

In Minnesota, officials took the rare step of closing all of the state’s public schools on Monday – the first time in 17 years.  Schools across Chicago, Milwaukee and St Louis were also closed, while officials in Washington D.C. and as far south as Atlanta have announced school closures today. source – Daily Mail UK